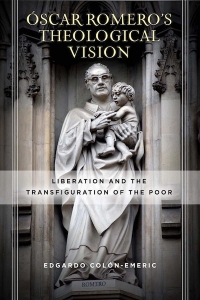 The New Media Epidemic: The Undermining of Society, Family, and Our Own Soul
By Edgardo Colon-Emeric
University of Notre Dame Press, 2019
$39.00   418 pp.

Thirty-five years after the fact, the Catholic Church recognized that the murder was a martyrdom. Thirty-nine years after his death, Oscar Romero was canonized a saint. An assassin’s bullet took Romero’s life on March 24, 1980, as he celebrated Holy Mass at the chapel of the hospital La Divina Providencia. It brought an end to his three remarkable years as archbishop of San Salvador.

When Romero became the archbishop, the mayhem of civil war was brewing throughout El Salvador. Structures of injustice and government violence kept large numbers of Salvadorans desperately poor. This oppression kept the oligarchy rich—and the fourteen familias cafetaleras, very rich. Armed guerillas, principally the Farabundo Martí para la Liberación National (FMLN), opened a violent struggle against the brutally repressive regime force, La Guardia Nacional. By the time the civil war was over in 1992, 75,000 people were killed. The Catholic Church and other Christian churches in El Salvador stood prophetically against what amounted to a war on the poor, calling for an end to the regime’s repression. The price of the churches’ stance was shown in a popular slogan of the right: Love your country; kill a priest.

Saint Oscar Romero’s story is familiar to many from the storyline of the 1989 Paulist film Romero, starring Raul Julia. Romero, a cautious and timid candidate, is appointed archbishop in order to keep the church quietly on the sideline as El Salvador’s trouble brews. But within weeks, the murder of Rutilio Grande, S.J., a vocal reformer and a friend of Romero, changes all that. Archbishop Romero finds his voice and fearlessly orients the church to its true nature. He denounces violence, stands uncompromisingly with the poor, and calls the regime to recognize the horrors it is perpetuating.

Is this narrative accurate? Well, it’s close enough. Although Raul Julia doesn’t look much like Romero, you can recognize him, and the events are historically quite reliable. But there’s something missing. Although you feel Romero’s anguish, you don’t really get a sense of what was going on inside him before Grande’s death or of what he was thinking immediately after.

Edgardo Colón-Emeric’s 2018 book Oscar Romero’s Theological Vision: Liberation and the Transfiguration of the Poor shows us what is missing: Romero’s theology. Here is a man who ponders all that is happening from within the long and rich faith tradition, which, like the coffee, is grown in Salvadoran soil. To the Spanish colonists, the mountains of El Salvador had seemed mystical, suggesting Mount Tabor, the site of Jesus’s transfiguration. The very name El Salvador (“the Savior”), refers to the story of Jesus’s climbing to the top of the mountain where the brightness of His divinity shone through the thickness of his humanity.

Long before Romero became a bishop, he pondered the meaning of El Salvador’s premier gospel story. Like preachers before him, he noted how Saint Irenaeus connected the transfiguration to the incarnation by way of a tidy phrase: Gloria dei, vivens homo (“The glory of God is a human being fully alive”). During his prophetic struggle, Romero repeatedly returned to Irenaeus’s idea. He was to give it a new, important twist: Gloria dei, vivens pauper (“The glory of God is the poor fully alive”).

Romero’s alteration was no doubt influenced by a seismic shift in the theology of all Latin America. In 1968, the Conference of Latin American Bishops (CELAM) meeting in Medellín, Colombia, pledged to make and live out of a preferential option for the poor, which itself rose out of the monumental final document of the Second Vatican Council, Gaudium et Spes (The Church in the Modern World, 1965). Gaudium et Spes begins: “The joy and hope, the grief and anguish of the men [sic] of our time, especially of those who are poor and afflicted in any way, are the joy and hope, grief and anguish, of the followers of Christ as well.”

Saint Oscar Romero was moving within a deep, rich theological tradition, one that was very alive to the time and place where he lived and served. By tracing this theology, Colón-Emeric makes a case for the Latin American Church as a source church, rather than a reflection church: that is to say, a church that generates theology rather than a church that simply employs theology from another time and place. He sees Romero as a father of the Latin American church in the same way that the ancient Greek and Latin theologians were fathers of the church and formulators of new and essential theology.

Just as the ancient fathers of the church generated their theology in response to the controversies of their time, Romero discovered and deepened his theology in reaction to the dreadful course of El Salvador’s history in his. Just as many of the ancient fathers expressed their theology not in academic works but by their preaching, Romero’s exploration and expression of theology was above all in his homilies. During his three years as archbishop of San Salvador, Romero’s Sunday homilies were broadcast over the radio. His preaching was for many the only reliable source of news about the week’s events as well as remarkable Christian teaching. An estimated 40 percent of all Salvadorans tuned in every week.

As the fourth-century church father John Chrysostom developed his theology in the pulpit, so did Romero. Both were thought of as pamphleteers and rabble-rousers, but both brought vivid new teaching out of the events they described. The subject was divinization, Christ in our lives; the subject was the gospel, salvation, church, and eschatology, forged into a new theology as tradition met the awful present. We still have trouble seeing homilies as the containers of serious new theology. This is not unlike the shock we received when several years ago the Swedish Academy awarded the Nobel Prize for Literature to Bob Dylan. Who would have thought his song lyrics to be comparable to any of the world’s best poetry?

Paradoxically, Edgardo Colón-Emeric honors Saint Oscar Romero the preacher and theologian by delivering a thoroughly academic work. This is no drawback. Rather, Colón-Emeric’s academic precision is a way of showing how grounded Oscar Romero’s theology is. Furthermore, Colón-Emeric’s book is indexed, has a wonderful bibliography, and includes abundant notes for the serious student. He gives us context that is evidence of wide reading and a depth of historical knowledge. There are references to thinkers important to Romero’s theology, including Gustavo Gutiérrez, Ignacio Ellacuría, Jon Sobrino, and, surprisingly, Hans Urs von Balthasar. In an engaging and convincing way, the case is made that in Saint Oscar Romero we have a pastor and a martyr, but also something much more: a father of the church, who gives us a new, rich, and challenging way to speak about God in our time.

Fr. Robert Washabaugh is the pastor of a cluster of three parishes in Norwich, Connecticut.

Editorial: A Late, Desperate Stage: On the Syrian Civil War
Scroll to top