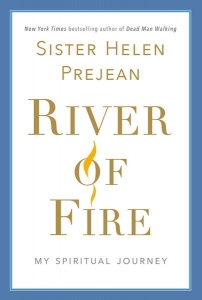 Sister Helen Prejean is best known for her decades-long campaign to abolish the death penalty, which she described in her best-selling book, Dead Man Walking. Her new memoir, River of Fire, chronicles her journey from unquestioning Catholic devotion to a more liberal interpretation of faith.

Prejean grew up in the 1940s in a strict Catholic family in New Orleans that said the rosary together each evening. She recalls her parents kneeling and praying by their bed at night.

Early on, Prejean knew she wanted to be famous, announcing to her eighth-grade classmates that she intended to become “Pope or president.” Later she said her faith was riddled with so much fear that she was even afraid of Jesus. She rejected various beliefs, such as the teaching that one mortal sin could send someone to hell for eternity.

Catholic nuns of the time were split among those who prayed and meditated in silence much of the day and those who embraced the social gospel by reaching out to poor people. Vatican II pointed the church in a more liberal direction. Prejan wonders, “Do Catholics still believe that only Catholics can be saved? Do Catholics still believe that the worst sins are sexual? What about war? What about racism? What does belief in God really mean?” She and others believed that “it was long past time for our Church to join the modern world.”

Prejean was transformed when she attended an event at which a speaker encouraged nuns to become more involved by helping suffering people. She began visiting a prisoner on death row and was present when he was put to death by electrocution. She would go on to witness more executions, which strengthened her determination to seek an end to legal killings.

Prejean remains a deeply committed Catholic nun. “What has happened to 18-year-old me, who joined the convent in search of mystical union with God? The search for God is still there. It never goes away. I am haunted by God.”

In 1965 there were 180,000 Catholic nuns in the United States. The number today is 60,000, with a median age above 70. Few teenagers today consider becoming nuns. When she was a young nun on retreat, Prejean said there was not a single poor person or person of color among the sisters.

Prejean, who is 80, traces her journey from deep isolation to engaged Catholicism. The author is a long-time journal writer, which helped her recall her spiritual journey in detail. “A rift is developing in our community,” she writes, “with ‘social justice’ Sisters advocating for us to become engaged with the struggles of poor people . . . and in the other camp the ‘spiritual’ Sisters, who emphasize prayer and the practice of charity.”

A surprising turn in her journey comes when Prejean falls in love with a priest from Boston. For seven years they write, talk on the phone and get together occasionally. It becomes increasingly evident that the priest wants to marry her, but Prejean makes it clear that she has no interest in marriage. For starters she cannot imagine living the rest of her life with one person.

As of 2018, 1,490 convicts have been executed in the United States. Another 2,705 persons are awaiting execution. Only 20 states ban the death penalty. Yet Prejean remains hopeful. “The soul of America is turning from legalized government killings,” she says. “Bring it on! The day of abolition cannot come soon enough.”

Bill Williams is a freelance writer in West Hartford, Connecticut, and a former editorial writer for the Hartford Courant. He is a member of the National Book Critics Circle.

Toward Universal Abolition by Chris Byrd

Too Political? by Paul Nyklicek
Scroll to top