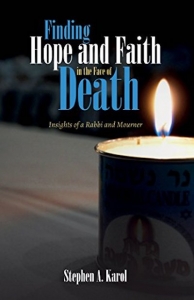 Finding Hope and Faith in the Face of Death:
Insights of a Rabbi and Mourner
By Rabbi Stephen A. Karol
Cascade Books, 2018
$15   90 pp.

It is not possible to escape having loved ones die, especially for people like me who are older and retired from work. My parents have died, my aunts and uncles have died, and now even some of my friends and classmates have died. We all need to find a way to deal with death.

Although so many people I have known and loved have died, I have never experienced deep and long-lasting grief. But I know those who have, including one relative whose baby died without any warning, just at birth. Quite a few months later she and her family came to visit me. My cousin walked right up to me, said she was so very, very sad, and then started to weep in my arms. We led her into the house and let her lie down and sleep in a spare room. It took her several years to overcome her initial, crippling grief.

I also worked with a woman whose father died when she was a teenager; it happened just before Christmas. Well into her forties, she still got depressed at Christmastime thinking about her father, and could not enjoy the Christmas season.

It was because of these two people that I wanted to learn more about mourning and overcoming grief. I also bought this book because, in the interest of full disclosure, I know the author, having taken an excellent class that he taught on the Book of Job.

Although written by a rabbi, this book is not just for Jews but for everyone. However, as one reads the book, one learns a lot about the Jewish faith. From my own Christian perspective, through Rabbi Karol’s book I grew to see more clearly how much the Christian faith owes the Jewish faith for Christian beliefs and traditions.

Grief and mourning are, of course, appropriate responses to death, and time must be spent in such a state. However, if one cannot overcome one’s grief it becomes a problem. This is not to say one should forget those who died: I still think often of my parents, grandparents, aunts, and uncles who have passed on, and I miss them all. Rabbi Karol shows us how the services and traditions Jews have steered them through the grieving and mourning process. But he enlarges what he has to say with messages important for non-Jews and nonreligious people, as well as for practicing Jews.

Rabbi Karol speaks from the basis of his personal faith, and also the basis of the Jewish faith in general. About God, Rabbi Karol points us to a Jewish prayer that states: “God is close to us as breathing, yet farther than the farthermost star.” “God is our shepherd, guardian, keeper, and a source of comfort and hope,” Karol writes. “I believe that we are born with our souls, which are implanted in our bodies at birth. Our souls are truly who we are—our personality, our uniqueness, the voice of conscience, the spark of the divine within us.”

About life, Karol says Jews believe that life is “a gift, a blessing from God,” that “we should appreciate the lives of those that died, and we should be thankful for the life we have and live it honorably.” He concludes, “The pain that you experience because of a death . . . can leave its mark in a way that seemingly can never be healed, or it can be lessened by a belief that we can be healed by life itself. God has put in us the power to draw on faith and courage, determination, perseverance and optimism.”

Death warns us that life is short, and we never know when our own time will be up. But after an appropriate time of mourning, it is time to move on and to do what God wants each of us to do: to strive to make the world better for everyone. We can’t accomplish much by ourselves; we are ultimately healed by being part of a community organized to work together to comfort the sick, care for the poor, and uphold justice—the basic goals of Jews and Christians alike.

I urge everyone to read this book. The Jewish and Christian points of view are often amazingly similar. Rabbi Karol says non-Jews often ask him, “Do Jews believe in life after death?” He says he believes our souls survive, and he believes in an afterlife. He says Jews refer to that as “the World to Come.”

I love this book because of its positive, supportive message that life is meaningful and important, that we have much to do, and that our faith and our community helps us accomplish good things. Death teaches us the importance of getting on with life.

Robert Kent retired from Cornell University after a long career in marine and environmental education. He attends the Episcopal Church of the Redeemer on eastern Long Island, New York.