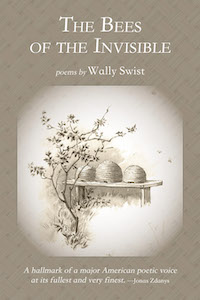 I was fortunate to attend a reading given by the poets Wally Swist and Richard Shaw in South Hadley, Massachusetts, this past November. During a brief question-and-answer period following the reading, I asked Swist if he might comment on how his poems achieve their unique sense of stillness, their atmosphere of quiet attentiveness that inflects both the music of his lines and the careful elucidation of his images. Among other things, he spoke of “listening to guidance” during his compositional process—a concept that communicated to me how much the art of writing, and the writing of poetry in particular, is an act of deep receptivity.

In his latest collection, The Bees of the Invisible, Swist attunes his inner ear to the nuances of language, memory, and the splendors of the present moment as expressed in “this day’s beatific salutation, / its own particular amen.” Swist’s poetic register is one of devotion: he looks closely at the world, from the “dusty-winged butterfly hovering / milkweed at the trailhead” to “the first green needles / pricking the air in the coiled red branches / of stinging nettles”, and renders it praise in song.

Like the German poet Rainer Maria Rilke, whose presence hovers over the book like a guardian angel’s, Swist’s work is suffused with the life of the spirit. At times he draws directly on the vocabulary of religious experience, such has the meditation on the “inviolate / unspoken mystery” of the Resurrection “What We Ever Really Need to Know”; other times he uses religious imagery more glancingly, to create and sustain a mood, as with the orchids in “Three Poems: The Talcott Arboretum” that present themselves “as does the color priests wear during / Eastertide to ascribe devotion / to the Passion.”

For all of its scrupulous observation of nature and the cycles of the seasons, Swist’s work is rarely content to stop at surface description, however finely wrought this description might be. Rather, these are poems where the physical and the metaphysical, the rhythm of daily life and the ever-present possibility of the sudden inbreaking epiphany, are never far apart. It is a world where “illumination could be found / in our very own backyards,” as he has it in the poem “The Souls of Those Who Have Passed Before Me”—itself another example of the way his work seems to collapse the distance between celestial and earthly, the living and the dead, as the speaker summons those he hopes will meet him in the afterlife and asks “for the balm between us / not to have been occluded by the linear time / that separated us.”

Swist has clearly read widely and deeply within the poetic tradition, and his work conjures the witness of poets from various times and places. In addition to Rilke (whose Das Marienleben sequence on the life of the Virgin Mary Swist admirably adapts here, along with several other of the master’s uncollected poems, in a standalone section of the book), there are poems inspired by and in dialogue with the work of Denise Levertov, Walt Whitman, W. S. Merwin, Robert Francis, and others, as well as international poets including Alberto Blanco, Carlo Betocchi, Tu Fu, and Georg Trakl. This gives the book the feel of a living exchange between the poet and his assembled chorus of voices, all coming together in service of a shared creative project.

It is not only fellow poets who are vivified in The Bees of the Invisible, but also friends, mentors, and teachers past and present; bygone family members such as the beloved uncle with “the sense of saintliness in / the darkness around his eyes”; and loved ones living out such moments as that memorialized in “Ley Lines,” the final poem in the collection:

We embrace, find ourselves in the timelessness
of our lives together, reaching out for each other’s

aging hands, touching what it is
that reconnects us to the ley lines of our existence.

It is this search for what Swist calls “the ore of friendship” that grounds these poems and gives them their profoundly human quality. As they move between the temporal and the spiritual, so do they move freely between the solitary act of intensive listening and the shared act of praise, of conversation. Every impression recorded in verse allows for its corresponding moment to “release that / wilderness within yourself / back into the open air”, and from these moments Swist articulates a world in which his hearers come to realize “that / not only are we all part of a whole / but that all is one.”

The Keepers of the Gifts By Claudette Burque

A Plea for Priority: The Crisis of Climate Change by Jane M. Bailey
Scroll to top