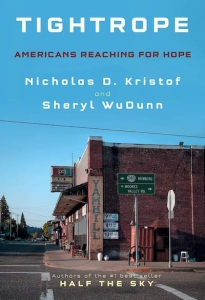 New York Times columnist Nicholas Kristof and his wife Sheryl WuDunn have written an ambitious book about what ails the United States. Their text is filled with stories of hardship blamed on poor personal choices and misguided government policies. The couple cite numerous studies to prove their points.

In the early 20th century, Congress adopted programs such as Social Security that put the United states on a progressive path, but that did not last until the end of the century. High school graduation rates tumbled and the wealth gap widened. The average chief executive now earns 300 times as much the average worker.

People and families with spiritual or religious convictions fare far better when confronted with depression, substance abuse, and risky behaviors. They are more likely to volunteer and less likely to engage in substance abuse, the authors say.

One unforgettable story involves a 13-year-old boy who approached a woman on a dark night in Tampa, Florida, and demanded her purse. When she hesitated, he shot her in the face. From behind bars the youth apologized to the woman, who in turn forgave him. The woman wrote to the court and asked for a reduced sentence, which was granted. “He woke me up,” she says. “My life became so much more enriched by forgiving him.”

Kristof and WuDunn compare the United States with other nations in terms of health care, employment, drug deaths, homelessness, and crowded prisons. “Some 68,000 Americans now die annually from drug overdoses, another 88,000 from alcohol abuse and 47,000 from suicide,” the authors say.

The United States is far more likely than most other nations to send offenders to prison. One study found that if inmates received drug treatment, the United States could save $36 billion a year.

Most other major nations emphasize rehabilitation instead of punishment. Portugal treats drug addiction as a disease rather than a crime. Only 6 people per million die annually from illegal drugs in Portugal compared with 348 in the United States.

“The United States has chosen policies over the last half century that have resulted in higher levels of homelessness, overdose deaths, crime and inequality—and now it’s time to take a different choice,” the authors say.

Government and private institutions must play essential roles, but the authors also list steps readers can take: Become a mentor to an at-risk youth. Sponsor a child through Save the Children. Send a donation to Reach Out and Read. Volunteer at a homeless shelter. Their suggestions are excellent starting points for readers who wish to put their timely and insightful words into action.

Bill Williams is a freelance writer in West Hartford, Connecticut, and a former editorial writer for the Hartford Courant. He is a member of the National Book Critics Circle.