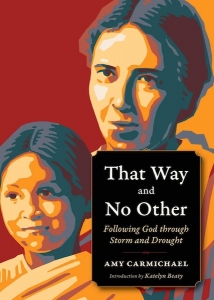 At seven years old, Preena was rescued from prostitution in a Hindu temple and brought to Amy Carmichael. At that moment, Carmichael embarked on a lifelong mission to rescue countless other young Indian children from similar horror.

Born in Ireland in 1867, Amy Carmichael experienced a religious conversion at age 12 while attending boarding school. When she was 17, her father died, and she was left to assist her mother by homeschooling her younger siblings. She went on to support local children through an outreach program she began. At age 21, while living in England, she heard God call her to overseas missions with the words “Go ye.”

After short missions in China and Japan, Amy was called to India. There she would live for 55 years, until her death in 1951 at age 83, carrying out her final mission. After learning about poor parents selling their children into prostitution, Carmichael set up Dohnavur, a home to rescue potential young trafficking victims and the most vulnerable of India’s children. The adult helpers formed a Christian fellowship in which they vowed to serve God through serving others.

Carmichael’s ministry in India was not an easy road, and there were many obstacles to surmount: discord, disease, malnutrition. Among the most difficult were cultural barriers. Carmichael was even accused of kidnapping. Through it all, though, she kept her faith. She lived in a harsh reality but had her mind fixed on the eternal, giving us a fine example of a person who is “in the world but not of the world.” She wrote of lofty, spiritual things while at the same time confronting the vilest forms of evil. Throughout her life, she wrote 35 books, full of stories of her life as well as inspiration and hope for people in all circumstances.

The editors of this compilation specifically chose passages from Carmichael’s work that would “inspire readers to read her books,” and “help guide readers in discerning their own call to follow Jesus, and to challenge and encourage them to remain true in the all-or-nothing way of discipleship that Amy modeled.” Carmichael believed our life is our witness and that God doesn’t waste anything. He will even be glorified in our times of trouble, perhaps more so than in our times of ease.

Marrying these two ideas, Carmichael’s writing serves as an encouragement to us even today, seven decades after her death. She wrote of her life, but even more than that, she bore witness to the presence of Jesus in her life and the work he did through her. Citing scripture, she meditates on what it is to live a good Christian life in humility and obedience to God, not thinking more highly of ourselves than we ought. One inspiring passage speaks of “forgetting yourself in serving others.” Elsewhere she states, “An evil covered up is not an evil conquered. So we do the thing from which we shrink with strong recoil; we stand on the edge of the pit, and look down and tell what we have seen urged by the longing within us.”

Human trafficking continues in our world today, and Carmichael’s words echo through the decades with much to teach us. A modern-day saint and hero to so many children, she was a pioneer in the work to save little ones in India from a life of slavery. The story of her brave life and bold faith is as relevant today as it was when she founded Dohnavur.

Amy Nicholson hopes to encourage and inspire others through her writing. She has been published in Country Woman, the Old Schoolhouse, the Lookout, and other publications. In addition to writing and discovering grace in ordinary places, Amy substitute teaches. Visit her at: amynicholson14.wordpress.com.

A Personal Mission: A Review by Amy Nicholson

Discerning How to Vote as a Catholic by Fr. Louis Arceneaux, C.M.
Scroll to top