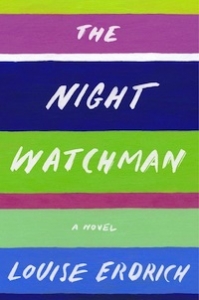 Termination. In 1953, North Dakota’s Turtle Mountain Band of Chippewa Indians faced that terrifying and bleak prospect. In a series of “extraordinary” letters to his daughters, Patrick Gourneau, the chairman of the tribe’s advisory board and grandfather of novelist Louise Erdrich, called federal legislation to end US government treaties “about the worst thing for Indians to come down the pike.”

Gourneau’s epistles inform The Night Watchman, Erdrich’s richly textured and wonderfully realized novel, her 17th. One of our more highly esteemed novelists, the American Indian Catholic writer received the National Book Award for fiction in 2012 for her novel The Round House.

The Night Watchman is set on the Turtle Band Reservation. Thomas Wazhashk, standing in for Patrick Gourneau and working at the town’s jewel bearing plant, is the story’s titular figure. As the tribe’s council chairman, he organizes a tribal delegation to travel to Washington to oppose House Concurrent Resolution 108, which began a policy of termination in 1953. This policy sought to abolish Native American tribes and assimilate them into mainstream society.

“Thomas,” Erdrich writes, “was of the after-the-buffalo-who-are-we-now generation.” He must learn how to lead the fight against Senator Arthur V. Watkins, a proponent of termination. Watkins is not a fictional character. He was a Republican and Mormon from Utah and served two terms in the US Senate. He believed termination would “uplift” Native Americans and “open the gates of Heaven” for them. Thomas wonders: “How could Indians hold themselves apart, when the vanquishers sometimes held their arms out, to crush them to their hearts, with something like love?” Provoked by the ghost of his old friend Roderick and disconcerted by spirit visits in the middle of the night, Thomas’s quest for justice also exacts a physical toll when he suffers a stroke in Washington.

Patrice Paranteau, the 19-year-old daughter of Thomas’s cousin Zhaanat, is the novel’s other leading figure. Unsettled by her erratic, drunken father, a storied former high school basketball player, she becomes the family’s night watchman. She also works on a jewel bearing plant’s assembly line and is her family’s chief source of support.

In one of The Night Watchman’s more vividly rendered sequences, Patrice travels to Minneapolis to discover what happened to her older sister Vera, who had relocated to the city months earlier with her infant son. Having never been off the reservation, and with no idea where to look, Patrice relies on the advice of amateur fighter Wood Mountain, who happens to be a fellow passenger on her train. “Go to the scum,” he says, “the questionable people who are in charge of things. Not good things.” Soon after her arrival, the callow woman discovers herself in the seedy nightclub LogJam26, at the mercy of proprietor Jack Malloy. In exchange for his help finding Vera, she agrees to perform as a “waterjack,” a kind of mermaid in a costume resembling Paul Bunyan’s ox, Babe.

Amid this demimonde of dilapidated and forsaken apartment buildings and seedy hotels where “muttering, grasping, shifting, snoring” men sleep in the entryway, Patrice fails to find Vera. She does, however, manage to locate Vera’s infant son. Patrice and the child return to North Dakota along with Wood Mountain, and for a time the trio enjoys an improvised domesticity.

Thomas’s and Patrice’s narratives would maintain readers’ interest by themselves, but Erdrich’s giving voice to a wonderful myriad of characters elevates The Night Watchman to another level. These include Louis Pipestone, the keeper of the tribe’s petition to revoke the House Resolution, who “tended the petition like a garden.” Elders Vernon and Elnath are Mormon missionaries “full of mystifying purpose.” The careful attention Erdrich pays to each character reveals more than individual portraits but a full, complex, and rich picture of a community all too accustomed to fighting “official men with their satisfied soft faces” for their existence.

The same could be said of the Erdrich herself. Political yet personal, finding the sweet spot between microcosm and macrocosm, The Night Watchman is a wonder of a novel to savor and treasure.

Chris Byrd writes from Washington, D.C. His work has appeared in America, Sojourners, and the National Catholic Reporter.

Wresting for Light: A Note on Police Violence by Jermaine Woodard Jr.

The Hidden Monk by Michael Ford
Scroll to top