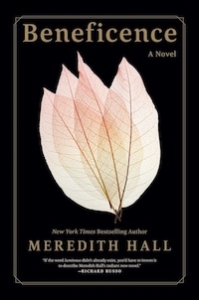 In Beneficence, Meredith Hall, author of the harrowing memoir, Without a Map, tells the story of the Senter family of Alstead, Maine. Through shifting points of view, the family’s mother, Doris Senter, the father, Tup, and their daughter, Dodie, tell the story of the family’s grace, fall from grace, and restoration to a state of grace more complicated than the first. Two brothers, Sonny, the eldest child, and Beston, the youngest, do not have their own sections; we see them through the eyes of Doris, Tup, and Dodie.

The first part of the book, dated 1947 and called “Before,” is a beautiful, lyrical description of family life on a small New England farm, reminiscent of the poems of Robert Frost and the stories of Sarah Orne Jewett. Doris has left her life in town where her parents ran a store to live with Tup, whose family has lived on their land for generations. But in the last generation, Tup’s mother had died young and Tup’s father, burdened with four children and a dairy farm, had let the farm go to seed and nursed a grudge against Tup for not finishing college with the money he had saved for him. But now the farm, in Doris’s eyes, is a paradise; she and Tup have restored it to its former solidity and prosperity, and the land nurtures them and their three children.

The only premonitions of trouble lie in Doris’s fear of something from the outside hurting the family, and in Tup’s passion for life and occasional bad temper. As Doris says of him, “He is a beautiful man. And for all that work, his smile flashes like a light. Like a spark from that fire inside he stokes so hot.” Here is Doris’s fear speaking:

But I have learned that nothing terrible is going to happen here. You have to be careful, to pay attention, and then you just trust that everything is going to be all right. It’s a price you pay for the quiet and the beauty of the land. Sometimes I think, We’re a little family on an island here, protected from the world’s problems. . . . We are apart from the world here and make our lives the way we want them to be.

Fear, but perhaps also a passive form of hubris. Doris clings to what she wants to see. Here is Tup reflecting on his family and his faults:

I sat quietly, uneasy, my children and my wife happy for the moment, I knew, but I felt that I may somehow have stained this day and could not say when or how. “You are a very good father,” Doris often says to me, and I am, I know that, but I remember the woundings of a child’s feelings and suddenly felt a deep sadness that I must sometimes be the cause of hurt in my own children.

Tup blurts out hurtful words in his anger; he acts before he thinks. He never settles down until the evening when the family gathers for reading in the front room.

Doris’s fear and Tup’s anger rupture the family when tragedy strikes in the next section of the book, “During,” which happens in 1948. It takes time for these ruptures to fully work themselves out in the third part, “After,” which covers the years 1950 to 1958. And then, finally, comes the time of healing in Part Four, “Here,” covering 1962 to 1965, and beautifully prefaced by a quote from French poet Paul Eluard: “There is another world, / but it is in this one.”

Here is Dodie speaking in the midst of the healing:

A wild and powerful river swept us far from shore, and then the current stilled and allowed us to make our way home. . . . it has become a story we finally are able to speak aloud and understand. This is what happened, we can say. Once, a long time ago, on a sleeting day here in this house, we can say. This is the shape of the journey we each have taken, we say. . . .

This is one of the most beautiful, haunting novels I have ever read, and so I hesitate to find any faults. The only problem, for me, is that the voices of Doris, Tup, and Dodie are not quite individual enough. That is, if I was dropped into one of these monologues where no clues are given, I could not necessarily tell, from the language itself, who was talking. But this never jolted me out of the dream of the novel.

The spirituality in the book is strong and nature-focused. The Senters go to church at the beginning of the book, lapse during the tragic years and their unfolding, then return as the healing begins. Of all the characters, Tup talks the most about God. His God is more immanent than transcendent, while Dodie rebels, for a while, against any notion of God.

In a way, the hero of the novel is the farm itself, or perhaps nature. The descriptions of the farm, the animals and the chores, the fields and trees, are lyrical, full of chiaroscuro, but also realistic. This is a real farm where cows are milked, hay scythed, calves castrated, and stillborn calves delivered. The sight and smell of blood, entwined with birth and death, is never far away. But as you read Beneficence, you are also bathed with the feeling that, as Gerard Manley Hopkins said in “God’s Grandeur,” “And for all this, nature is never spent; / There lives the dearest freshness deep down things. . . .”

Towards an Inclusive Capitalism by Daniel Amiri

A Model of Joyful Activism by Jane Bailey
Scroll to top