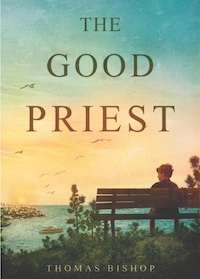 Thomas Bishop is a Connecticut judge, as I am. For years, we have been colleagues on the Connecticut Appellate Court. I have read scores of his well-constructed and closely reasoned judicial opinions and have come to respect his razor-sharp legal acumen and polished, persuasive writing.

What I did not know until recently was that my friend Judge Bishop could put his considerable talent to use in the service of a totally different type of writing—fiction. He has proven his versatility and creativity in his debut novel, A Good Priest, which I heartily commend to readers, particularly but not exclusively readers raised in the Catholic tradition.

I must confess—I use that word in the colloquial sense—that I myself was not raised in the Catholic tradition. I am Jewish, and so the practices and beliefs of religious Catholics, while generally known to me, lie somewhat outside my direct personal knowledge. But I know a good story when I see one, and this book fits that description.

The themes are placed in a Catholic context because the novel’s protagonist, Father Pat Keefe, is a priest. But the problems he confronts are more universal: what to do when one’s duty collides with doing what is right (a problem made more urgent in the context of clerical abuse of children); how to navigate obedience to higher authority when that authority is more interested in self-protection than in adhering to its sacred responsibilities and ideals; how to square one’s desire to serve in the trenches when the opportunity arises to assume a position of greater status and greater responsibility; how to handle one’s urges when, despite a vow of chastity, one is attracted to a member of the opposite sex.

These weighty issues all confront Father Pat, a priest in a small New England fishing village. Father Pat seems on the surface like a fairly average, albeit admirable, man from a loving family. His seminary training is traditional. He loves ministering to people, particularly people who are down on their luck and have no one else to stand up for them. His whole body and soul are committed to carrying out the work of the Gospel—helping people deal with life’s challenges with love, kindness, and forgiveness. He often contemplates the issues facing him by sitting on a special bench and staring out into the sea.

As a young priest, he is confronted with his first moral test, and it is a huge one. He becomes aware of a priest who has sexually abused boys in the parish. The priest makes confession, but to Father Pat’s deep dismay, he lacks true remorse and treats absolution as if it’s a chance to check off a box on his moral scorecard. Despite the church hierarchy’s desire to make the problem just go away, Father Pat helps the victims and their families deal with the legal and emotional fallout of their ordeals. This does not endear him to the higher-ups. The offending priest pays the price for his predations, à la prison justice.

Other challenges await Father Pat. One of his sisters has a female partner, forcing him to rethink his unexamined views about homosexuality. He ends an affair with a woman after deciding that the priesthood means more to him than carnal pleasures. He befriends a prisoner convicted of murder and accompanies him to his execution, although he would prefer to be outside the prison with protesters rather than taking part in the grim ritual of death. He commits himself to creating living space for ex-convicts struggling to reintegrate into the community. He derives great satisfaction from helping everyday people cope with everyday problems.

Soon a new progressive bishop becomes aware of Father Pat’s exceptional gifts with people and his pragmatic and Gospel-centered organizational skills. What then is Father Pat to do when asked to serve as the new bishop’s vicar, which will offer him opportunities to assist many by contributing to the church’s valuable community work, but which will take him out of the trenches and move him into the church bureaucracy?

In The Good Priest, Judge Bishop has drawn a picture of an unpretentious man whose natural instincts are to want to do the right thing, but who is not always exactly sure what that is. At the heart of Father Pat’s compelling story is his zigzag journey through a minefield of difficult choices. He must continuously confront the conflict between duty and obligation, between adhering to the strict letter of the law and diverging to do what he thinks is right, through his personal desires and the demands of his vocation. An admirer of Dorothy Day, he is not guided by abstract theological principles but by the helping instincts of a good man navigating the very real problems of being there for others who need a loving hand. One needn’t be a priest to relate to his problems. They appear in a variety of contexts in just about everyone’s life in one form or another.

Through it all, Judge Bishop skillfully guides the reader through the moral maze Father Pat is traveling through. And through it all, the reader comes to empathize with him and root for him as he negotiates his way through the thickets he confronts. Spoiler alert: Father Pat does manage, somehow, to live up to his moral and legal responsibilities. And—true to the title—he remains The Good Priest. By the end of the book, the reader has come to wish that he could spend a quiet hour with this fine man, sitting on his bench, gazing out at the water, and talking about the mysteries of existence and the concrete problems of the day. Father Pat’s journey is intriguing, thought-provoking, and challenging. I urge readers to take it with him.

Douglas S. Lavine, a judge trial referee on the Connecticut Appellate Court, is an occasional contributor to Today’s American Catholic.

The World as It Is by Ed Burns

Beauty for Ashes: A Story by Catherine Chandler
Scroll to top