On March 24, 2021, Walla Walla, Washington, became the 41st city in the United States and the first city in the state of Washington to endorse the International Campaign to Abolish Nuclear Weapons’ Cities Appeal, urging the United States to sign and ratify the UN Treaty on the Prohibition of Nuclear Weapons (TPNW). Internationally, well over 200 cities have already endorsed the Cities Appeal and called upon their nations to sign the TPNW.

In 1970, the five nuclear nations at that time—England, France, the United States, Russia, and China—drew up the Nuclear Non-Proliferation Treaty, which was not only committed to the non-proliferation of nuclear weapons, but “to pursue in good faith . . . the cessation of the nuclear arms race at an early date” and to seek “nuclear disarmament.”

Fifty-one years later, there are four new nuclear states—North Korea, Israel, India, and Pakistan—and we find ourselves, rather than at the disarmament table, in the midst of a new nuclear arms race.

The TPNW, which was adopted by 122 states at the United Nations in July 2017, bans the development, testing, production, acquisition, possession, stockpiling, transferring, and use and threat of use of nuclear weapons, which now, like landmines, cluster munitions, and biological and chemical weapons, are illegal under international law. The treaty is a reminder from the 54 non-nuclear nations who have ratified it that it is time for all nations to commit to disarmament.

Two days after the US dropped the bomb on Hiroshima, Albert Camus wrote in his newspaper, Combat: “Our technological civilization has just reached its greatest level of savagery.” As of 1950, an estimated 340,000 people had died as a result of the atomic bombings of Hiroshima and Nagasaki. Our standard nuclear weapons today, roughly 14,000 in number, are multiple times more powerful than those used in 1945. Like those unleashed earlier, however, they too are designed to destroy cities and those who inhabit them.

Everyone knows about the catastrophic humanitarian and environmental consequences of any use of nuclear weapons. Detonating a nuclear weapon by accident, miscalculation, or deliberate use would pose grave implications for human survival, the environment, socioeconomic development, the global economy, food security, and the health of current and future generations.

It is essential to get rid of nuclear weapons before they get rid of us. It is important to act now because none of the nuclear nations is currently interested in disarmament. The US, China, Russia, North Korea, and England are in the expensive process of modernizing and upgrading their nuclear weapons. In 2019, for example, the nine nuclear nations spent $73 billion on their arsenals of weapons of mass destruction, almost half of that sum spent by the United States. In addition, the US has begun to implement its $1.7 trillion project to upgrade its nuclear arsenal over the next 30 years. 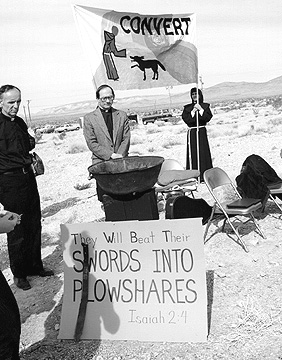 Members of Desert Lenten Experience hold a prayer vigil during the Easter period of 1982 at the entrance to the Nevada Test Site. Photo courtesy of National Nuclear Security Administration / Nevada Field Office

As Catholics, let us recall that the Vatican was one of the first three countries to ratify the TPNW. In November 2017, Pope Francis declared that “Weapons of mass destruction, particularly nuclear weapons, create nothing but a false sense of security. They cannot constitute the basis for peaceful coexistence between members of the human family.” Most importantly, Pope Francis moved the church from its former position, which maintained that possession of nuclear weapons as a deterrent was “morally acceptable [as] a step on the way toward a progressive disarmament,” to its current position that “the very possession of nuclear weapons” is to be “firmly condemned.”

It is also important to act now because we are at a mobilizing moment, a moment of momentum with a new president bringing us back into treaties we had recently abandoned or had not renewed. It is the right time for American cities to demand that their government work toward disarmament and the appropriate moment for climate activists and nuclear weapons activists to work together to prevent the omnicide that will occur as a result of either climate failure or nuclear war.

In his April 1963 “Letter from Birmingham Jail,” Martin Luther King Jr. urged us to recognize that “We are caught in an inescapable network of mutuality, tied in a single garment of destiny. What affects one directly,” he asserted, “affects all indirectly.” Six years later, Apollo 11 astronaut Michael Collins supplied us with an unforgettable image that underscores King’s idea: “I really believe,” he writes, “that if the political leaders of the world could see their planet from a distance of 100,000 miles, their outlook could be fundamentally changed. That all-important border would be invisible, that noisy argument silenced. The tiny globe would continue to turn, serenely ignoring its subdivisions, presenting a unified facade that would cry out for unified understanding.”

During the past year, we have learned the truth of King’s message about our “inescapable network of mutuality” and Collins’s notion that we all have the same address on this planet. We have been in quarantine not because we cannot live with one another, but because we cannot live without one another. Together all of us constitute one totally interdependent entity on this earth. To continue to spend billions of dollars making weapons specifically designed to obliterate millions of us is absolute madness.

Patrick Henry is Cushing Eells Emeritus Professor of Philosophy and Literature at Whitman College in Walla Walla, Washington. He is eager to help anyone interested in bringing this matter to their city council. He can be reached at henrypg@whitman.edu. Additionally, a copy of Resolution No. 2021-46, “A Resolution Supporting the United Nations Treaty on the Prohibition of Nuclear Weapons,” is available here. Patrick Henry drew up this resolution, and it was passed by the Walla Walla city council. It might serve as a template for others who would like to bring this issue before their city councils or local civic leaders.

Converted to the Gospel by Rosalie G. Riegle

“We’ve Got to Find a Way to Bring Some Loving Here Today”: Marvin Gaye’s...
Scroll to top