We conclude our Summer Reading Series today with a look at a new book from writer and civic activist Pete Davis. You can find out more about Pete’s ideas and projects for deepening democracy and solidarity at his website here—Ed. 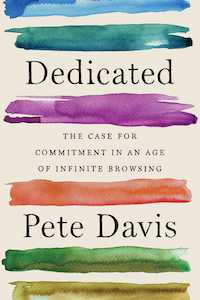 Dedicated: The Case for Commitment
in an Age of Infinite Browsing
By Pete Davis
Avid Reader Press/Simon & Schuster, 2021
$27   272 pp.

The 58th chapter of Saint Benedict’s monastic Rule includes what is known as a “vow of stability”: the promise of the prospective monk or nun to live out the rest of their days in the community they have chosen, thus ensuring the continuity and deep commitment necessary for a life of work and prayer. “Precisely because it contrasts so sharply with the fragility of most commitments in our hypermodern society,” writes Gerald W. Schlabach, the vow of stability “may speak more directly to our age . . . than anything else in the Rule.” Schlabach interprets the principle of the vow as “Stay longer—because there is no way to discern God’s will together without commitment to sit long together in the first place.”

Stay Longer could serve as an alternate title for Pete Davis’s new book, Dedicated: The Case for Commitment in an Age of Infinite Browsing. Inspired by his 2018 Harvard Law School graduation speech, “A Counterculture of Commitment” (which has been viewed over 30 million times on YouTube), Dedicated is both a paean and a practical guide to the art of seeing things through. (In the interest of full disclosure, Davis is a past contributor to Today’s American Catholic.)

The genesis for the speech and the book from which it grew was the pervasive trend Davis noticed among members of his generation to “keep their options open” for as long as possible. He admits they are not necessarily to be blamed for this attitude; it is something that has been foisted upon them by a society that values novelty, fungibility, and “disruption” over durability, dependability, and simple daily effort. Borrowing an image from Polish philosopher Zygmunt Bauman, Davis describes this as “liquid modernity”: our collective tendency to “remain like liquid, in a state that can adapt to any future shape.”

Against this Davis contrasts the call to become a “solid person” in a “liquid world.” One does this by forging deep connections—to places, to people, to causes and communities—that can endure over time. It means, perhaps frighteningly at first, to begin to close some of the doors in our endless “hallway” of options and select a room where we can settle. In “a culture that arranges our economy against loyalty to particulars,” that “educates for advancement . . . over attachment,” choosing the way of rootedness over the flash and panache of short-term gain amounts to almost a transgressive act. Yet, as Davis reminds us, “sparks go nowhere without the long-haul gathering of tinder.”

As a means of informing and inspiring his readers, Davis devotes the central portion of his book to profiling figures he terms “long-haul heroes”: those who “have overcome their fears of, and beaten back the threats to, sustained commitment.” These include the lawyer Evan Wolfson, who undertook a 32-year battle for marriage equality; the journalist Peggy Berryhill, who has spent decades spotlighting the stories of Native Americans on her radio programs; and the urban designer Ryan Gravel, who dedicated himself to the conversion of Atlanta’s old railway lines into multiuse trails. What all of them have in common is an understanding, in Davis’s words, that “it is noble to give your life to a cause—but it is even nobler to give your daily life to it” (or, as he expresses elsewhere, “There aren’t enough people who are not just willing to die for something, but also willing to live for it”).

Davis is an astute diagnostician of the fears that can keep people—younger people, but really anyone who has been conditioned by an era of “infinite browsing” and “open options”—from casting aside their alternative futures and really digging in. He identifies these as the fear of regret (that our commitment to one thing will foreclose the ability to commit to something else—be it a person, place, or cause—that might be a “better fit”); the fear of association (that joining up with a larger group will threaten our closely guarded sense of self); and the fear of missing out (that our long-haul commitment is keeping us from something more exciting). Enlisting insights from philosophers, sociologists, critical theorists, and many others, Davis unpacks the origins of these fears in simple, straightforward language that wears his vast erudition lightly. More important, he offers strategies for overcoming each one that are grounded in lived experience.

For one of these strategies, posed as a way to help with the process of decision making, he invokes the Jesuit practice of Ignatian discernment. “[Practitioners are] not supposed to only think about the advantages and disadvantages of the options,” he writes, “they’re supposed to feel them. The practice is more than just an examination of options—it’s an examination of yourself having been presented with those options.” He quotes the Jesuit priest James Keenan, who characterized the discernment process as a “visceral” one in which you don’t just make a self-inventory with your mind or heart: instead, “You search your guts.”

The Ignatian reference is one among many that will resonate with Catholic readers. The words of Pope Francis, Dorothy Day, and Father Józef Tischner of the Polish Solidarity movement are interwoven with allusions to the work of biblical scholar Walter Brueggemann, Thomist philosopher Jacques Maritain, and death penalty abolitionist Sister Helen Prejean. From Brueggemann Davis develops the notion of the “scandal of the particular”—the idea that God discloses universal truths through concrete people, places, and situations—to show how close attentiveness to a single locality can reify one’s relationship to the wider world. Anyone who has followed the work of a town zoning board (or read Ulysses or Paterson) can attest to this: by focusing on the story of one piece of land, we grasp the matrix of social, political, economic, and environmental factors that determine its fate and the fate of those who live there.

Throughout the book, the religious life itself is used as a sort of paradigm for commitment. We hear Sister Mary Dacey of the Sisters of Saint Joseph explain how the commitment of consecrated life “grows into options” and Saint John Cassian, the fifth-century monk, on how voluntary poverty creates the space to go deeper into one’s calling. Even a touching portrait of the author’s father alludes to his “monk-like” routines in his work on behalf of indigenous communities. When Davis cites William James’s 1906 speech “The Moral Equivalent of War,” in which the philosopher suggests we channel the sense of solidarity experienced in battle into more lifegiving projects, it is hard not to think of the age-old comparison between monasticism and the martial life recently expressed by the Benedictine Columba Stewart: “It’s like joining the military—the esprit de corps, the uniform, the sense that you’re a part of something bigger than yourself.”

These and other religious references never feel like they are speaking to a particular segment of Davis’s audience. Instead, he has a way of repurposing religiously redolent terms such as “conversion” and “vocation” so as to open up their many layers of meaning and integrate them into his broader project of commitment. The structure of the text itself becomes a form of bridge building, as voices from various eras, backgrounds, and ideological camps are brought into dialogue with each other—and, by extension, with the reader.

There is also a subtle political critique at work that lends the language an added gravity. In his call for a more committed society, Davis is unafraid to employ words like valor, fidelity, and cultures of honor that have long been coopted by conservatives. Yet implicit in his analysis is how decades of policies espoused by the Right—namely, giving free reign to corporations “that are happy to be part of a nation when it helps them but pretend they are from nowhere when their nation asks them something in return”—are inimical to the very ideals conservatives claim to stand by. It is difficult to nurture a culture of honor when you have reduced all individuals to “market actors” whose freedom is expressed through consumer choice, or to foster a sense of fidelity to a job or a neighborhood when you make it harder for workers to organize or invest in strip malls instead of shared community spaces.

The solution to widespread institutional collapse is not just more public investment, as important as this is, but in a collective re-embedding in our civic life. “If you start to feel like your neighborhood is becoming an administrative unit at the intersection of various indiscriminate flows of action between opaque energy, transportation, housing, and police departments, you won’t be in a relationship with it for much longer,” Davis writes. Elsewhere he quotes his grandfather: “The government is not ‘they.’ It is ‘us.’” That core recognition of our responsibility to one another has become a guiding principle of our time, and it permeates the pages of Dedicated. To Davis’s credit, it never comes off as moralizing; the book is not so much a prescription as an invitation, offered freely and with levity and joy, to begin the work of our own long-haul journey.