Our Summer Reading Series continues today with two reviews from Amy Nicholson. Her review of the memoir Cancer Gifts: Lessons in Gratitude, Acceptance, and Perseverance is available here—Ed. 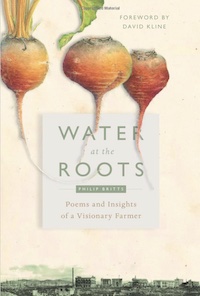 Water at the Roots:
Poems and Insights
of a Visionary Farmer
By Philip Britts
Edited by Jennifer Harries
Plough, 2018
$16   161 pp.

Faith is like water at the roots.
– Philip Britts

If you lived according to your beliefs, would your life look different than it does right now? Philip Britts lived by his ideals. He was determined to walk closely with Jesus, keep his commands, and live an intentional and Spirit-filled life at a time when it was particularly difficult to do so. Britts began his adult life just as the world was preparing for World War II. While other men were going off to fight, Britts desired a peaceful life close to the land and his community, maintaining a relationship with Christ. His faith informed his life decisions. This book tells how he managed to uphold his ideals in a world in turmoil.

A poet, pastor, and farmer, Britts was born in 1917 in Devon, England. Water at the Roots is something of a memoir in poems. Edited by Jennifer Harries, the book chronicles key events in Britts’s life while employing his poems to provide insight into his reactions to those events as they happened around him, both locally and worldwide.

A conscientious objector desiring to act on Jesus’s teaching to love our enemies, Britts sought a community in which he could live out this biblical principle. While other young men were being drafted, he learned of the Bruderhof, an intentional Christian community in Cotswold, England, where people were living peacefully according to the Sermon on the Mount. He and his wife, Joan, joined Bruderhof. When circumstances surrounding the war forced the community to relocate, the couple emigrated to Paraguay with some others. Once there, Britts farmed the community’s share of the Paraguayan wilderness, did agricultural research, and wrote poetry. Amidst a world in upheaval and confusion, he lived a simple, if difficult, life close to the land and close to the Savior.

Britts maintained that war is always the result of our disconnection from other people. “War is the extreme expression of division between people,” he wrote. “War occurs when nothing more unites them, when there is no longer any common ground, any room for restoration, when people are so utterly divided that there is nothing left but for the one to try and exterminate the other.”

It was his contention that in order to stay connected to our fellow man, we must remain connected to the land on which we live. Once we lose connection to the land, we lose connection with each other, reality, and God himself. For Britts, these weren’t just lofty ideals. He got his hands dirty. As a member of the Bruderhof community, he labored with the other members out in the field, ploughing, planting, and harvesting wheat and vegetables. He put his faith into action.

At the same time, he saw that technology was taking over agriculture. He reasoned that if this trend were to continue, humans would lose their vital connection with the land, and, as a consequence, be divided from one other. Britts continued to employ simple, time-tested farming methods and worked for the betterment and growth of the community—and, in so doing, the world outside the community as well.

In 1947, at the request of the International Refugee Organization in Geneva, the Bruderhof community welcomed one hundred refugees from Europe. Two years later they sent delegates to the United States to discuss the possibility of establishing another community there, which was eventually established in 1954. The growth of these intentional communities ensured that more people would be able, like Britts, to live out biblical principles in peace with others.

Harries writes in her “To the Reader” preface at the beginning of the book of Britts’s “response to his age’s trials—to root himself in God and dedicate himself to community and to the land he farmed.” Through all the difficulties he faced in his life—an international war, a civil war in Paraguay, drought, personal sickness, and even locusts—he continued to absorb the Word of God and allow it to inform his decisions, replenish his strength, and renew his resolve to live not just for himself, but for his community and, ultimately, his Lord. Amidst his busy life of farming, raising a family, and serving his community, he still found quiet time to meet with God in prayer and reflect on Scripture.

The subtitle of this book is Poems and Insights of a Visionary Farmer. To have vision means seeing beyond your current circumstances and, often, seeing what others around you don’t see. All too often we succumb to the way of the world because it is the one in front of us, the one most visible. It’s so easy to do what everyone else is doing. But Britts’s faith informed his vision. He believed Jesus was calling him to live his life differently. He took Jesus’s words “Follow me” to heart and acted on them. Although he was only 31 when he died in 1949, the reader can draw much inspiration from his life. Even when we find ourselves in a confusing and scary world, we too can find strength and hope in Jesus, like “water at the roots.”

Amy Nicholson hopes to encourage and inspire others through her writing. She has been published in Country Woman, The Old Schoolhouse, The Lookout, and other publications. In addition to writing and discovering grace in ordinary places, Amy substitute teaches. Visit her at: www.amynicholson14.wordpress.com.

Summer Reading Series: Gene Ciarlo on “A Farewell to Arms”
Scroll to top