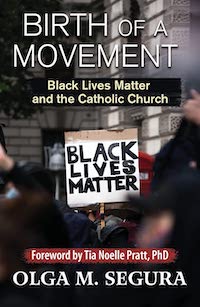 Like the proverbial threads woven in a sweater, white supremacy and patriarchy are intricately and intentionally entangled.
– Brianne Jacobs, “White Supremacy and Roman Catholic Patriarchy,” October 20, 2020

Oh Lord, help us to listen! If we don’t listen to those who call out the institutionalized racism in our US Catholic Church, I fear for its future. Who should listen? Who can listen? Who will listen?

First, I must listen, and I have been trying in this long pandemic year, reading books that have schooled me in how I benefit from white privilege even as I acknowledge ongoing complicity. Olga Segura’s new book, Birth of a Movement: Black Lives Matter and the Catholic Church, opened my eyes still further. And so I continue, reading the New York Times 1619 Project Segura recommends, then wishing she had included a bibliography so I could easily find more of what she read as she researched this amply footnoted call for change.

Next, I must interrogate my own personal history of racism and privilege and how it makes it impossible for me to feel the apprehension my Black friends feel whenever they face the world. Oh, Lord! I can’t do this alone. Teach me compassion and empathy as you guide me to be less racist. Because of Segura and others, my understanding of US history has shifted dramatically, and I ask all educators to listen. For starters, they can look at the curriculum in the 1619 Project.

Truly, our economic system is enmeshed to this day in a racist capitalism, where US wealth, in the north as well as the south, was built from sugar, rice, and cotton grown by Black slaves. Yes, we all know that slavery was legally abolished, but it is replicated today in many ways by militarized policing, mass incarceration, and racial injustice in all segments of society. From employment to schooling to housing to healthcare, the discrepancies show starkly, particularly in the proportion of Covid-19 deaths suffered by people of color.

Fellow parishioners, listen to Black theologians and historians who are finally gaining prominence. Segura introduced me to Shannen Dee Williams, assistant professor of history at Villanova University, and her excellent work on slavery in the US Catholic Church. Segura also reacquainted me with the founders of the Black Lives Matter movement—Alicia Garza, Patrisse Cullors, and Opal Tometi—and with Tarana Burke, a Christian who started the #MeToo campaign, so they are now more than just famous names. For the first time I understand how Black women activists are changing the world with a new type of decentralized leadership.

Listen, parish leaders—both priests and lay! Every church in the U.S. should research its own racist history. Parishioners don’t have to wait for pastors to direct them, or even to preach about it in their homilies, which few of them do. Lay people can do it themselves by interviewing elders, searching out those who were excluded, and accessing archives. Then each congregation can take steps to pay reparations and work for justice.

Now some laity won’t listen, perhaps can’t listen, stuffed to the gills as they are with a so-called “traditional Catholicism” which doesn’t hear Pope Francis’s call to equality. After quoting the pope, Segura pleads that “Everyone’s words should matter in our Church.” We have to admit, however, that this country’s church is divided, and that one of the fault lines is racism. Segura mostly avoids this intra-church divide, likely as a way of making her case more communicable to the bishops.

For most imperatively, Segura asks our US bishops to listen! And that’s when I begin to wail and lament: How, oh Lord, can we get them to listen? This is what Segura demands, calling Catholic leadership to listen personally and urgently to the strong Black women who are changing our world, and then to actively lead in demanding the “drastic defunding of law enforcement, the demilitarization of U.S. police officers, and a reallocation of ‘resources to address the social, psychological and family problems experienced by [prisoners]’, as Pope Francis suggests.”

Perhaps I’m too old and cynical to think the bishops really will listen. Are they too entrenched in other right-to-life matters to realize that the church’s continuing failure to address its own racism, and to urge the faithful to do the same, is holding the US back from real change? Calling for the retraining of the police and the reallocation of resources to help rather than hinder Black citizens would be a huge step forward, a step they have yet to take. So would paying reparations, as Georgetown University is doing.

It is true that in 2018 the US Conference of Catholic Bishops formed the Ad Hoc Committee Against Racism and published a letter, “Open Wide Your Hearts,” that built on three earlier bishops’ statements about racism. The letter sugarcoats the participation of Catholic institutions in slavery and discrimination while calling for the conversion of hearts and social institutions. It’s a start, but who hears it? If the bishops devoted even 10 percent of the time, money, and energy to this crucial right-to-life issue that they do to abortion, perhaps we would see some real change at the local level, in all states. A visit to the Ad Hoc Committee’s website reveals that there is only one working staff member—a Michigan attorney named Danielle M. Brown, who is beginning a speaking career in a few parishes. Elsewhere, a link to an article on Black Lives Matter by Bishop Emeritus Edward K. Braxton of the Diocese of Belleville in Illinois is inoperable. As Fr. Bryan Massingale says, “The church must stop treating racism as an ad hoc issue. . . . Anything they say about race always has the comfort of white Catholics in mind.”

Segura does quote a statement from USCCB president and Archbishop of Los Angeles José Gomez (who seems to be more interested in other church problems) made in the wake of the protests over the murder of George Floyd, but she urges that direct action is more important than documents. That direct action first involves listening. In addition to listening to the cofounders of Black Lives Matter, Segura asks the bishops to give other lay voices the chance to address the continuing racism in the church. Frankly, I can’t imagine this happening. As Brianne Jacobs writes, “to pull at one strand [of white supremacy and patriarchy] will unravel the whole.” I think the bishops know this, and are afraid.

My heart lifted a bit on July 12, however, when America magazine proposed a Fourth Plenary Council. The headline above the article read, “Bishops’ meetings won’t heal the U.S. church.” It will take all of us—clergy, religious, laity—to address a problem in which we’re all complicit. At first, I was disappointed in the proposed date—2029. But then I realized that it’s the preparation—the listening—that’s most important. Perhaps the essential process of listening to Black Catholics and their allies will instill a change in the bishops and a change in the church. And so I close by praying, “Lord, help me to have hope, to believe that even bishops can change, and that my grandchildren will someday see a church that practices what it preaches.”

Our Screens Will Not Save Us by Marcus Mescher