Among my favorite memories of childhood in the 1960s are those connected to the meals my Italian-American family shared at Easter. Each was a large-scaled and lengthy affair presided over by my paternal grandfather, a Neapolitan church painter-decorator by profession with a flair for domestic ritual. Having spent a career making the interiors of Catholic churches here and abroad look like corners of heaven itself, he understood how prayer could be cast into forms more enduring than words alone. To be sure, the shape and meaning of human speech and its ability to convey beauty were matters of considerable importance to him, a fact reflected in the eagerness with which he took to learning English upon arriving in this country, and then in the vocabulary he went about assembling for himself out of dictionary terms native-speakers hardly ever used.

At Eastertime, though, he’d resort to the fewest possible words to complete the sprinkling rite he conducted over the table, a perfectly fitting reenactment of the water baptism everyone gathered there had experienced in infancy but performed, in this case, with the help of a short length of palm or two and small bottle of holy water. The latter he made sure to prepare well ahead of time, often replenishing the contents of the bottle with water drawn from the large receptacle that stood in a corner of the vestibule of our nearby church.

“Bless all of us here, Lord,” my grandfather would intone in a gravelly voice from his place of honor at the head of the table, dipping the palms into the bottled reservoir of sanctity as he did so, “and all of those who can’t be with us today.” Then, with the full-arm extension of a major-league pitcher or experienced jai alai player, he’d let loose the droplets of ablution that landed as often on the meal laid before us as on the foreheads and shoulders of giggling cousins and their shushing parents, where they’d presumably do the more good. Even the gigglers secretly looked forward to the lovely, indoor cloudburst that preceded the Easter meal each year and admit today, at middle age, to missing the magic that such rituals once bestowed on our family gatherings.

As I remember it, however, there was no implied directionality to my grandfather’s annual invocation. Never did he instruct any of those present to turn in their seats in order to face a place apart from the table where Christ was somehow more likely to be found, his assumption being that the second person of the Trinity was in our midst, his spirit wreathing our table or carried on every drop of the water that ended up dampening the bread rolls or escalloped potatoes.

That we ourselves formed a wreath of intimacy of our own, literally by rubbing shoulders with each other or sharing smiles across the table, didn’t lessen the significance of the gesture to him in the least. The fervor of the man’s faith and the depth of his trust in the church’s way with symbol and sacrament were enough to assure him that each of us had been consecrated from head to toe in the very water rite he chose to reprise on our behalf, made “living temples” (1 Cor. 6:19) of the God from whom all sanctity flows. And while the sound of his invocation may naturally have risen upward, to someplace far beyond the upstairs apartment in the duplex-style house he kept with my grandmother, he believed that Easter’s author and father of its tomb-fleeing hero-of-a-Savior was as closely involved in the affairs at hand as any other guest at his table. Such is the nature of a God eterally yearning to be united with his people.

Schooled at close range, then, in the grammar of ritual as it played out in my grandfather’s household on holidays and other occasions, I recognized, even at a young age, what similarities existed between the meals my family shared at home and the elaborate table ceremony of the Mass we attended every Sunday morning. Their shapes certainly mirrored each other’s. Both involved blessings, storytelling, and the consumption of special foods in whose preparation we believed God himself played a hand. The “table-centeredness” of the Eucharist was obvious enough in places like the one where my liturgical imagination was formed (Fig. 1), an elongated rectangle-of-a-building dressed in a period style—though its interior arrangement had the effect of distancing lay worshipers from the priestly actions of the sanctuary. It received far more explicit expression, however, in those churches built on centralized floorplans (Fig. 2) that were rising with increased frequency in my hometown along with other communities across the country as a consequence of the liturgical reforms of Second Vatican Council. 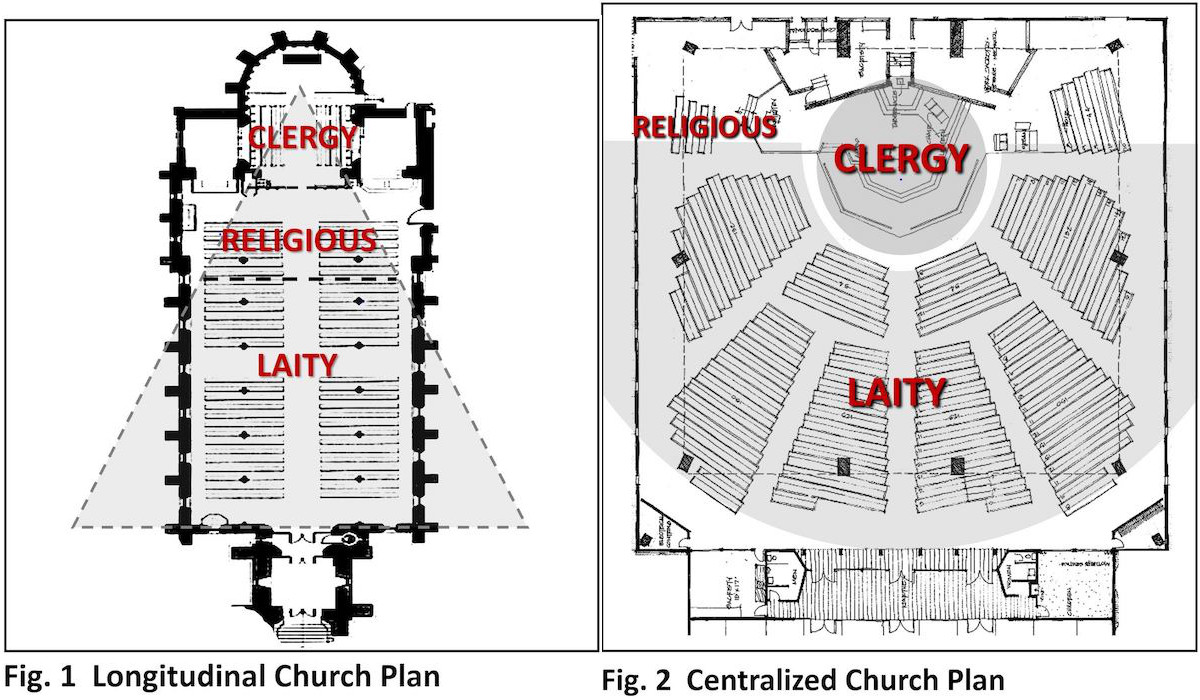 Within the latter, the altar table stood not at the head of the assembly area but at its heart, where it could be encircled by worshipers in the way that dinner guests in the West intuitively surround the tables to which they’re called. Inspired by the council’s efforts to amplify the human dimension of the Eucharist and promote greater popular participation in its mysteries, pastors overseeing such round-bodied churches proceeded to describe them as extensions of “God’s dining room,” their altars as places where the church partook of a “divine banquet”—terms as questionable to many believers as the notion that what they saw solely as “the unbloody Sacrifice of Calvary” belonged anywhere but in a “proper” place of Catholic worship.

By the latter, they meant a structure on the order of one of Europe’s countless “basilican-styled” churches, its elongated and compartmentalized interior designed to leave no doubt as to who within the church’s hierarchical structure were the primary “agents” of liturgical prayer. The oblong body of such a setting fostered a sort of “tunnel vision” on the part lay worshipers assembled within it, their attention directed forward—not so much to take in any action at the altar but to gaze upon the tabernacle. The tabletop (or “mensa”), of the altar, set deep within a sanctuary precinct and fronted by clergymen with their backs to the people, was largely concealed from the laity, after all. What lay worshipers “did” at Mass, then, was largely internal and silent, a combination of following along in their missals as best they could, reciting the rosary or directing their private intentions toward the Blessed Sacrament reserved in the tabernacle. In effect, polity trumped piety as the chief shaper of the church’s places of worship well up to the time of Vatican II.

Among those self-described “traditionalist” Catholics in the U.S., there persists even today an attachment to building types favorable to what might be called a “marching band arrangement” of the liturgical assembly. This is especially true of Latin Mass enthusiasts, who find in the ad orientem posture of worshipers required of the extraordinary form—that is, their orientation toward so-called “liturgical east” and thus the City of Jerusalem in imitation of the presiding priest—reason to gather in spaces that are long and relatively narrow. Any student of classical music, however, will attest to the fact that the “symphonic arrangement” of musicians commonly employed in concert halls, crescent shaped and centered on the conductor’s podium, is more likely to promote the kind of “ensemble” performance that orchestras demand of their players. The semicircular organization of orchestral musicians simply helps them hear and respond to each other’s playing while fallowing the gestures of the conductor much better than were they to be ranked in long columns.

This is precisely what our bishops have prescribed since Vatican II with regard to the church’s places of worship, the designs of which are expected to “express the hierarchical structure and the diversity of functions” within the baptized assembly without distorting the “close and coherent [spatial] unity that is clearly expressive of the unity of the entire holy people” (General Instruction of the Roman Missal, 294). Echoing the council’s call for “fully conscious, and active participation” on the part of all members of the liturgical assembly (Constitution on the Sacred Liturgy, 14), the United States Conference of Catholic Bishops made clear in its 2000 instruction, Built of Living Stones: Art, Architecture, and Worship, that the modern setting of the Mass should promote “both internal and external” forms of involvement in ritual action by believers who perceive themselves as belonging to “a single body united in faith, not simply as individuals who happen to find themselves in one place.”

Such official guidelines should encourage Catholic parish communities in this country to think beyond the somewhat formulaic approach to church architecture that served the church for centuries prior to the liturgical reforms of our time. The rectangular church-form deemed “truly Catholic” is as much a thing of the past, in my estimation, as the rectangular classroom, courtroom, or boardroom—each of which, nowadays, assumes a shape, interior layout, and decorative treatment born less of formula than of function. Church buildings for Catholic use can likewise emerge from the unique needs of the parishes that erect them and thus appear to be designed from the inside out, their purpose not to coerce their users into facing a fabled city from ancient Palestine—an “odd orientem” at best these days—but together with prayerful self-reflection toward the Heavenly City (1 Pet. 3:18) whose foundation and glories they themselves represent.

Michael E. DeSanctis, Ph.D. is retired professor of fine arts and theology at Gannon University in Erie, Pennsylvania. He writes widely on Catholic church architecture and serves as a liturgical designer and consultant.

Eucharist: An Opportunity for Familial Reception? by Ray Temmerman

To Believe, Teach, and Practice: Forty Years a Priest, and Counting! by Fr....
Scroll to top