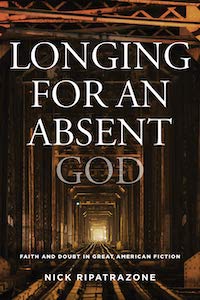 Longing for an Absent God is a deft, sprightly look at Catholic American fiction over the last 70 years or so, roughly from the era of Vatican II to the present day. Given the time period, one would expect certain writers to make appearances: Flannery O’Connor, say, or Walker Percy. They certainly do appear, and Ripatrazone, a longtime high school English teacher, places them in lively conversation with each other, as one would expect of an experienced instructor. But what makes this book especially valuable is the width of the net it casts. Along with the expected “heavy-hitters,” Ripatrazone makes persuasive cases for the influence of Catholicism on writers rarely thought of in such religious terms, from Thomas Pynchon to Cormac McCarthy.

The writers covered in Longing for an Absent God could be broadly categorized into two groups: devout and lapsed. O’Connor, of course, belongs to the former category, as she attended Mass regularly her entire life. Walker Percy converted to the faith when he was a young man, an experience that greatly influenced his body of work. But there are also many American writers who were raised in the faith before lapsing from it, in one way or another. This strand of the book is original and idiosyncratic, illuminating aspects of literature and Catholicism both.

Take the case of Pynchon, someone who has been one of my favorite writers ever since I first read V. at the age of 15. (Perhaps I was too young for such a novel, but hey, you can’t change what formed you.) I learned a long time ago that I would never understand everything in Pynchon’s ultra-dense texts. Indeed, letting oneself become immersed in the erudition without tracking down every reference is one of the principal pleasures his writing affords. But perhaps I should have read more closely, for the influence of Catholicism, as Ripatrazone demonstrates, is unmistakable in Pynchon’s work.

Little is known about Pynchon himself. He has never granted an interview, never been professionally photographed. Based on the accounts of his friends in college, he regularly attended Mass. There are certainly references to Catholicism in his novels. As Ripatrazone points out, V. features a priest who descends beneath the sewers of New York City to baptize rats and alligators, portraying the kind of cross-species missiology that Mary Doria Russell would later explore in The Sparrow. But even more telling than individual plot points is the overall shape of Pynchon’s novels. Works like V. and The Crying of Lot 49 are often called “systems novels,” termed such for their attempts to delineate the vast global systems that shape human behavior. This approach had much in common with that of another Catholic of the time with big ideas, the media theorist Marshall McLuhan.

In works like The Medium Is the Message, McLuhan mapped out the emerging “global village” engendered by mass media. McLuhan was influenced by the work of Jesuit priest Pierre Teilhard de Chardin, who imagined a coming collective consciousness he called the noosphere. Heady stuff, of which Pynchon was well aware, having his own interest in Chardin and Jesuit thought as a whole. Ripatrazone reminds us that three seminal figures of the information revolution in the 1960s—Pynchon, McLuhan, and pop artist Andy Warhol—were all Catholic, drawing on their faith’s influence for their own work.

Perhaps the most surprising and illuminating example of a writer whose Catholicism goes mostly unnoticed is Toni Morrison. She converted to the faith when the was 12 years old. Indeed, “Toni” is a nickname derived from Saint Anthony of Padua, the confirmation name she chose for herself. Morrison’s faith, as evidenced in her work, is a profoundly bodily faith, ever attentive to the physical suffering of Christ during the Passion and the ways that suffering echoes throughout human experience. When Morrison watched the 2004 film The Passion of the Christ, she found much of excessive and uninteresting. Yet she still responded to the bodily reality of the story: “I was looking at it like it was a lynching,” she said, “this is a betrayed man who is hung, lynched.” Arguably the literary artist who has most poignantly and powerfully depicted the realities of slavery, Morrison drew from Catholic imaginings of suffering to craft her work.

As I came to the end of Longing for an Absent God, it occurred to me that “devout/lapsed” may not be the best framework for thinking about the writers Ripatrazone has assessed. Perhaps a better framework would be content against form. Often, when a work of fiction gets tagged as “religious,” it usually has to do with the content of the work. Is there a priest? A crucifix on the wall? A long-suffering Irish mother? Must be Catholic!

Such reduction is hardly unique to Catholic works. Religious fiction from other cultures, be they Hindu or Muslim or Buddhist, often get identified as such due to rather superficial criteria: the presence of prayer rugs in a scene, for instance, or a Buddha statue in a front yard. But as the writers above illustrate, some of the most interesting Catholic writing is the result of engaging with the form of Catholicism rather than its mere content. What aspects of human experience is Catholicism particularly adept at illuminating? What larger patterns in society or history become apparent when examined through a Catholic lens? It is perhaps those formal concerns, more than subject matter, that best demonstrate what Catholic-influenced literature can accomplish?

This is not to deny that much can also be accomplished at the level of content. One of the most fascinating passages of the book looks at the work of Louise Erdrich. Erdrich is best known as a chronicler of Native American life on the Ojibwe communities of the Upper Midwest, communities she is intimately familiar with. Yet her books are also densely, thoroughgoingly Catholic. Priests, nuns, rosary beads—they’re everywhere! The Ojibwe communities have been profoundly shaped by the longtime presence of Catholic missionaries. A complex legacy, to be sure, and one with its share of trauma. But Erdrich doesn’t shy away from that complexity; she embraces it in her novels, taking pleasure in seeing just how tightly she can intertwine Catholic teachings with Indigenous experiences.

A writer like Erdrich, deriving such energy from the “bothness” of her own experience—fully Catholic and fully Ojibwe at once—demonstrates the surprising resilience of Catholicism at the level of subject matter. A simple change in perspective, in setting, can transform the clichés of faith into wondrous, unusual, even frightening reading experiences. As Ripatrazone’s book demonstrates, fiction can take what is old and make it new again and again, fashioning the familiar into the thrillingly strange. Indeed, the Catholic writers discussed here are often at their best when they lead their Catholicism, whatever form it may take, into unusual, unexpected directions. I can’t help but think of the passage in the Gospels about the tree and the vine. The vine supports the branches, lifting them up where they might otherwise grow brittle. Eventually, the vine entwines itself around the branch so tightly that it is difficult to say where the vine ends and the branch begins.

So it is with the writers in Longing for an Absent God. One may not think that Catholic insight and sprawling systems novels would together, but the work of Pynchon demonstrates they complement each other rather well. Catholicism and Native American spirituality may seem unrelated, or even at odds, but the work of Erdrich shows how one goes with the other, often to rapturous effect. Over and over, seeds of the faith fall on ground one might take as inhospitable, only to see strange, compelling new forms of life grow forth. ♦

Adam Fleming Petty is a writer and stay-at-home dad. His novella Followers was published by Etchings Press in 2016. His work has appeared in the Paris Review Daily, Electric Literature, and the Los Angeles Review of Books, among others.

A Poem by Gerard Garrigan, OSB
Scroll to top