Although he has never had a particularly strong sense of vocation, Dr. Richard Hooper is an English sculptor who has sought to develop the talents he believes God has given him—creativity and imagination as well as a certain skill. He says he also values the gifts God has given us to work with in the world in the form of “amazing materials, shapes, and colors, and even incredible technologies.”

Richard, a guitarist and singer at an Anglican church in Liverpool, explains: “If God is the creator of all gifts, as I believe he is, our mere practicing them is always to his glory; and if, by practicing them, we can give pleasure and or illumination to others, I am confident God is happy with our efforts, as would the father of any child who worked diligently to bring richness to this world.”

Richard has been particularly influenced by these words from the Book of Exodus—“I have filled him with the Spirit of God in wisdom, in understanding, in knowledge and in all kinds of craftsmanship”—and by Saint Pope John Paul II’s Letter to Artists in which the pontiff writes: “None can sense more deeply than you artists, ingenious creators of beauty that you are, something of the pathos with which God at the dawn of creation looked upon the work of his hands.”

It has to be acknowledged that flowing monastic habits or too much of a contemplative mind don’t sit well with rotating machinery, Richard points out. “I hope to follow Saint Paul’s admonition to be ‘in’ the world but not too much ‘of’ it.”

Born in 1958 at Liss in Hampshire, England, Richard moved around Britain in his early years because his father was an Anglican priest and a theological college lecturer. It was through him that Richard developed a love of ecclesiastical architecture: when he was growing up, each village with a church was a must-see car stop. His artistic temperament came from his mother who was an amateur watercolor painter. Richard’s great-grandfather had worked with the celebrated civil engineer Isambard Kingdom Brunel in Cornwall—a beam engine he helped develop is exhibited at the Science Museum in London.

When Richard was young, he tended to create drawings of a somewhat fantastical, if naïve, nature; nonetheless, he says, “a parishioner of my parents’ acquaintance, with some credible artistic knowledge, saw them and remarked that ‘the boy has some artistic ability which should be nurtured.’” While much of his education, at least in primary school, was spent “looking out of the window,” according to one teacher, the lessons he really remembers were the rarer ones involving creativity or, rarer still, invention—certainly not the bulk of one’s Western education, he notes. 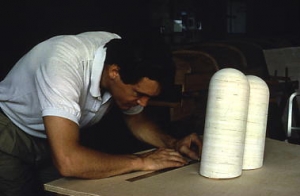 These days Richard is Associate Professor in Fine Art and Design at Liverpool Hope University. He also has his own studio practice on the outskirts of the city. Initially he created his sculptural work using conventional machine tools, such as lathes and milling machines. One such sculpture was a commission for a domestic meditative cross with the theme of Christ’s suffering by emptying himself on the cross. This was a void set in a discus-shaped form, mounted on two supports on a slate stand.

Although a sculptural form may start out as a drawing on the back of the envelope or napkin, Richard most frequently develops the design with computer-aided design (CAD). Over the past decade or more, he has sought to amalgamate the creative and productive aspects of designing using digital techniques. He purchased a somewhat large (13’ x 13’ x 13’) and heavy (11-ton) computer-aided milling machine so he could directly translate the digitally rendered concept into a three-dimensional reality.

“For some people this methodology is too far from the human hand,” he admits. “But for me, though, it is infinitely closer to the purity of the mathematical—and sometimes theological—abstraction I am aiming for.”

Another piece, Trinity (2009), was a conceptualization of the triune God: three elements but one entity. The green translucent cast acrylic sought to convey the divine immanence: God’s becoming man, spirit, and matter. “Sometimes the conceptual or theological meaning of a piece springs to mind after the essential form has been conceived, as in the case of this sculpture. It was initially a study in geometry which I later decided could be a visual metaphor for the tripartite God.” 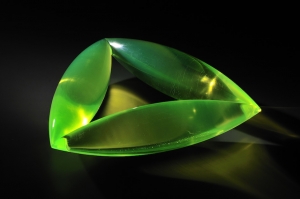 At other times, Richard’s starting-point is the concept or theological theme, which he then turns into a sculptural form to express his thoughts. This happened in 2013 with a piece entitled He Is with You. “I had wanted to do something with boats because the piece was going to be a thank-you present from his former parish to my Anglican priest brother who is a keen sailor,” Richard explained. “The piece could stand for Jesus’s presence with us in life’s trials. This, again, was a simple concept of Christ asleep in the Galilean boat before he calms the storm. All figures, including that of Christ, were omitted in order to focus on the idea of life’s difficulties and that, ultimately, Christ is in control.”

As a sculptor, Richard’s work is a function of his combined interests of geometric form, engineering methodologies (“tools ’n’ stuff”), and materiality (“a love of the properties of materials”) in a minimalist (“visually simple”) vein. It often involves forms derived not only from Euclidean concepts (that is, based on “simple” spheres, cubes, cylinders, cones, or dodecahedrons, the classical Platonic solids), but also on non-regular forms arising from mathematically complex non-Euclidean geometry such as topology and calculus (a kidney or doughnut shape, for example).

His work is represented by Contemporary Applied Art in London and del Mano Gallery in Los Angeles. One can find his sculptures in the permanent collections of the Los Angeles County Museum of Art, the Mint Museum of Craft and Design in Charlotte, North Carolina, as well as in many private collections, mainly in the United States. He exhibited at the applied art exhibition Collect 2005 at the Victoria and Albert Museum in London and at SOFA (Sculpture, Objects and Functional Art) in New York.

Of his personal spiritual practice, Richard says: “I wouldn’t hold up my prayer life as a model to aspire to, far from it. Like many people, I find prayer hard at any prolonged duration. Nonetheless, I do read Bible notes (UCB), and pray briefly each morning (or, at least, each morning I mean to!) and before bed at night. I also pray with two others in a ‘prayer triplet’ fortnightly; and on Sunday afternoons I pray with two others for the life of our church. Often I also pray during the day for guidance, forgiveness, protection, wisdom, and to offer thanks and praise when events prompt me.

“Perhaps I’m a bit of a jack-of-all-trades, having devoted myself in my early life to other activities such as javelin, rugby, cricket, and squash as well as playing the guitar in a worship group and, more recently, writing contemporary Christian songs.

“The first I wrote when I was 57 came simply from a chord progression. I found myself playing and this led to some lyrics which seemed to fit—as simple as that. I wrote another because I couldn’t think of many settings of the Lord’s Prayer to contemporary music so I resolved to attempt one. A further project was trying to set the Christmas story to music—that got a bit out of hand, encapsulating the whole sweep of Jesus’s life and ending up 12 minutes long.

“Christ was himself a carpenter,” Richard continues, “so I can certainly relate to him at the level of splinters! I often ask myself how much of a perfectionist would he have been, did he make mistakes in his work (as I do so often), and yes, what would have come out of his mouth when he struck himself with a hammer (assuming he did). In my more elevated moments, I do marvel, like many, at the wealth of imagination which God’s universe demonstrates.

“I can also say that, when a piece of work is completed, one does get a sense of God’s love of creativity and the joy he gets from seeing our best efforts. I sometimes imagine Jesus standing, smiling approvingly and sharing the moment, with his hands folded, saying ‘not bad for an amateur, son.’”

Michael Ford is an author and former BBC journalist. He lives in England. His email is hermitagewithin@gmail.com.

You Are a Holy Nation, a Royal Priesthood by Gene Ciarlo