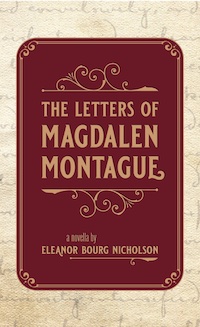 Eleanor Bourg Nicholson’s The Letters of Magdalen Montague is a novella presented as a collection of fictitious letters found in the attic of an abandoned house in Paris in 1947. The epistles are written by “J” from England and addressed to “R” in Europe and represent their correspondence between March 1902 and May 1941. In that time, obsessed with a young woman, J travels from London to Budapest and back again. Following the mysterious and intriguing character of Magdalen Montague, for whom he initially has a romantic fixation and later an almost saintly admiration, J is led to places, people, and experiences that eventually bring him to faith in Jesus Christ. Over the course of four decades, two world wars, and a consistent tugging by the Holy Spirit, he is transformed from an atheist only interested in pursuing worldly delights to a believer who desires only to serve God and his kingdom.

Through the missives, the reader experiences J’s disdain for the church, his love of a hedonistic lifestyle, and his obsession over the character of Magdalen Montague. It is his curiosity over her that drives him to visit places which we see in the end are actually markers on his spiritual journey. The first time he enters a church where Magdalen has been, the building has a visceral effect on him. He finds it dark, oppressive, even nauseating. He wonders what led her into such a dreadful place. Not realizing it was God and the spirit of worship, he assumes it must have been a romantic interest.

The scene prompted me to reflect on scripture. In the Bible, we are called to participate in collective worship. Hebrews 10:24–25 says, “And let us consider one another to provoke unto love and to good works: Not forsaking the assembling of ourselves together, as the manner of some is; but exhorting one another: and so much the more, as ye see the day approaching” (KJV). Beyond the Bible exhortation, what continues to draw me to church? I heard the announcer on a Christian radio station recently say that since the beginning of the pandemic, an estimated 50 percent of former churchgoers no longer attend church. Are people as repulsed by the church as J? Have they just found other things to do on Sunday morning? Or has church simply—yet tragically—become irrelevant?

Considering religion a waste of time, J wants nothing to do with the church until Magdalen enters a convent. Sensing he’s been led into a field by the spirit of the absent Magdalen, he has a vision of the crucified Christ. It is a life-transforming moment for him as he submits to Jesus as his savior. Consequently, he comes to revere the church he once despised.

The reader can assume by J’s tone of disappointment in his subsequent letters that R continues to live a life of heresy and debauchery, chasing after his own desires even as J urges him to convert. This is reflective of J’s changed heart and pain upon seeing a dear friend suffer so when he, too, could instead experience the peace of Jesus. How many of us can relate to his pain when we see those outside the church suffering, missing the peace only Jesus can bring?

Using the traditional epistolary format and florid language reminiscent of an earlier time in literature, The Letters of Magdalen Montague illustrates the fact that God’s forgiveness and redemption are timeless—they are not confined to any particular era. In addition, God uses people, visions, even weariness over our own wretchedness to draw us to himself. He will use any means he pleases to accomplish his purpose for our lives. Once we are his, nothing can snatch us from his hand.

Amy Nicholson hopes to encourage and inspire others through her writing. She has been published in Country Woman, The Old Schoolhouse, The Lookout, and other publications. In addition to writing and discovering grace in ordinary places, Amy substitute teaches. Visit her at: www.amynicholson14.wordpress.com.