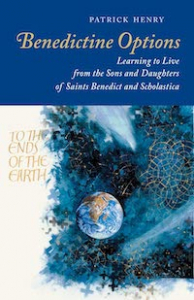 Benedictine Options:
Learning to Live from the Sons and Daughters
of Saints Benedict and Scholastica
By Patrick Henry
Liturgical Press, 2021
$19.95   162 pp.

“People are fascinated by Benedictines.” It is on this premise that Patrick Henry has authored what might be described as a direct response to another book to whose title he alludes: The Benedict Option by Rod Dreher. Henry notes how this current moment is “a time of extraordinary possibility for interchange between monastic tradition and the larger culture,” with his program being much different from Dreher’s conservative approach.

While both authors draw on a quote from About Virtue, written by philosopher Alasdair MacIntyre and published in 1981 by University of Notre Dame Press, regarding the need for a modern St. Benedict, Henry states, “Benedictine options are embodied in the lives—not just the life—of Benedictine men and women, who are not forsaking the world but are for the sake of the world.” Rather than float above the world in a protective ark, as Dreher recommends, Henry observes that the best place to be is where we can see what is going on, at ground level, or even knee-deep in a marsh.

Henry does not consider himself a monastic. He comes to this topic partly through his wife, Pat Welter, who was educated by Benedictines and has been close to them almost her entire life, according to the book’s acknowledgments. He has spoken at a variety of Benedictine gatherings since 1990, and has served as moderator for events sponsored by Monastic Interreligious Dialogue. He has been a day scholar at the Studium, the research center at St. Benedict Monastery in St. Joseph, Minnesota, since 2004. He has also taught religion at Swarthmore College and served as executive director of the Collegeville Institute for Ecumenical and Cultural Research.

His research for this volume is broad and objective. He cites T. S. Eliot, the New Yorker, Dr. Seuss, and Jewish tradition, among many other sources. He avoids a strict definition of the Benedictine charism, noting dangers in trying to do so. In the Rule of St. Benedict, he finds a sort of trellis, where the “plants” (Benedictine monks, sisters, oblates, and others) can grow within a certain framework while being able to adapt to the era in which they live.

He offers five characteristics of the Benedictine charism: experimental, rhythmical, communal, ecumenical, and narrational. His explanations of those traits blend well together and are readily comprehensible, stressing a balance to human existence that St. Benedict wove throughout his Rule. Benedict drew from his predecessor, St. Basil, who found the kingdom of heaven in all, regardless of their social status, their sinfulness, or their intelligence.

Creatively, Henry looks at historical tradition within the church through the lens of Dostoevsky’s character Ivan Fyodorovich Karamazov, from the novel The Brothers Karamazov. He addresses Gnosticism, Pelagianism, Donatism, and monasticism as possible solutions to Karamazov’s dilemma: how to make sense of an unjust world. He describes monasticism as an example of the church “turning outward to embrace the world”—a claim that seems incongruous at first, until one considers that monastic life is neither an escape nor a retreat from life, but a means of engaging with it in its most elemental form.

Henry’s most pointed response to the “option” detailed in Dreher’s book comes via the example of Benedictine sisters. When the first group arrived in America from Eichstätt, Bavaria, in the mid-1800s, they were viewed as a “wagonload of trouble” by the monks who had invited them to serve the people. Drawing on the writings of later Benedictines who studied how these pioneering women changed the face of monasticism, adopting an entirely different style of life than they were familiar with in “the old country” (where they were strictly cloistered) in order to found schools, hospitals, and other ministries, Henry praises their innovation and persistence. This extends to how the women of Benedictine monasteries forged ahead with renewal after the Second Vatican Council.

The book discusses at length how Benedictines have been at the forefront of the ecumenical movement. Not only are Benedictine oblates welcomed from other Christian denominations, but Benedictines have engaged in dialogue with those of other faiths for decades, including Buddhist and Hindu monastics. Henry recalls his involvement in the Gethsemani Encounter of 1996, a meeting of 25 Christian monastics and 25 Buddhist monastics at the Abbey of Gethsemani in Kentucky. The very notion that those of such diverse backgrounds could relate well simply by getting to know each other while honoring their distinct practices is proof that the “spiritual life” and life itself are not distinct concepts.

Henry recognizes how people are tired of divisiveness, of fragmentation. He finds in monasticism solutions—“or at least hints at solutions,” as he puts it—to contemporary problems that cannot be addressed through the language of psychology, political science, ethics, or anthropology alone. In the final section of Benedictine Options, he takes Dreher to task for an unhealthy obsession with matters involving sex. Rather than moving so far backward, Henry advocates for a middle ground, “where monastics and the rest of us live.”

Monastic life is, after all, not just a matter of “submissive compliance.” The Rule of St. Benedict comes together to form a guide for balanced discipline, promoting the development of a healthy human being who is grounded in the love of God and is willing to share that love with others. As Henry concludes, “The monastery is a living witness to the truth that community is something that happens when the environment is right, when discipline and spontaneity, leadership and discernment, family and hospitality, prayer and work are rightly ordered.”

Henry credits Benedictines he has known personally for 50 years for his insights into the monastic way. In his close observation of their lives, he recognizes openness, curiosity, and other positive attributes. Those seeking a rootedness in their faith and practice, integrated with a flexibility to deal with the unpredictability of daily life, will find in these pages a solid, broad-based assessment of Benedictine monasticism and its continuing value in the 21st century. ♦

Julie A. Ferraro has been a journalist for over 30 years, covering diverse beats for secular newspapers as well as writing for many Catholic publications. A mother and grandmother, she currently lives in Atchison, Kansas.

Time and Materials by William Droel