By Julie A. Ferraro

While five years of planning intended to gather religious, oblates, and those with an interest in the Benedictine charism and spirituality from across the United States and around the world for a hybrid meeting—in person and virtual—hosted at Mount St. Scholastica, Atchison, Kansas, from June 21-24, Covid-19 forced a last-minute change to an all-virtual format.

The colloquium, viewed as a “seeking, questioning, and learning process,” was sponsored by the Federation of St. Scholastica—now the Monastic Congregation of St. Scholastica, a union of 17 monasteries of Benedictine women religious—as part of the celebration of the 100th anniversary of the approval of their Constitution by the Vatican on February 25, 1922.

The presentations and discussions were themed “Benedictine Life: A Vision Unfolding” and focused on three topics: Wisdom, Witness, and the Way Forward. Morning prayer for each day, as well as some of the presentations, heralded from the Mount St. Scholastica monastery dining room, and others from the speakers’ homes.

June 22 began with morning prayer, followed by Sister Judith Sutera of Mount St. Scholastica, author of St. Benedict’s Rule: An Inclusive Translation (Liturgical Press, 2021), speaking on how the history of the Benedictines—the “yesterday”—creates the essential narrative for today and tomorrow.

Sister Judith explained how the beauty of the Benedictine way provides a vessel for doing what is needed at a specific time. Historically, Benedictine women have been at the forefront of implementing a broad and adaptable mandate, moving from the strict cloisters of Europe to missionary work in the United States, while maintaining their monastic and contemplative life. Their monasteries have become centers for education, while Benedictine women have become cultural influencers, peacemakers, and so much more. 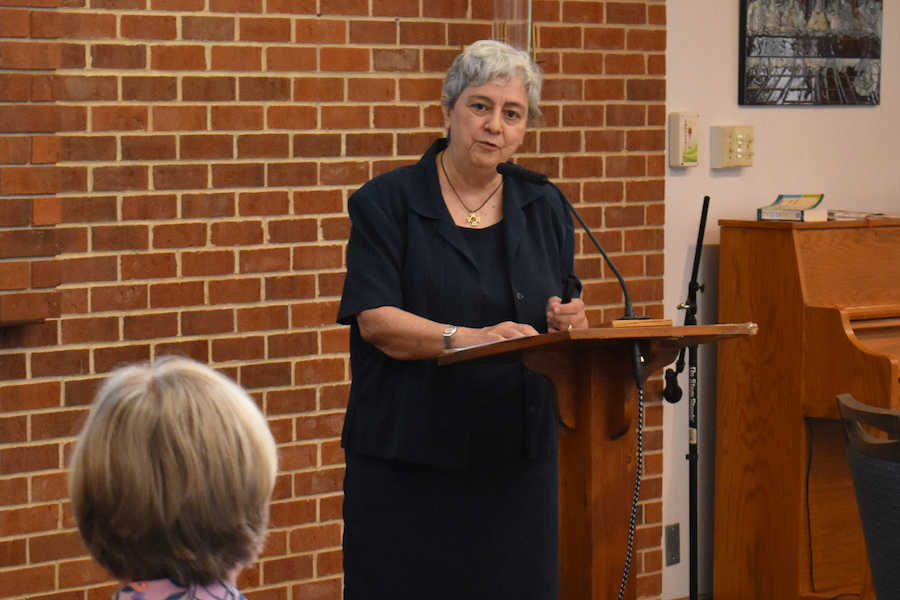 “The Spirit works in restlessness,” noted Sister Judith. Wherever the Benedictine women established a monastery, they knew the importance of creating a place of prayer and community, the foundation from which all else springs.

“History shapes how we face the future, and we must nourish ourselves with stories that fortify us,” Sister Judith said. In that light, Benedictines continue to gain an understanding of what Benedictine life is and how to live it where they are.

Asberry peppered her talk with questions for reflection, including, “How is it possible to give witness to truth that lives in illusion and hope in a world filled with despair?”

“Consciousness matters, my friends,” Asberry said, adding that the work of Benedictines is to be able to see the world in new ways.

She delved deeply into the concept of evolutionary consciousness, from as far back as 50,000 years to the “momentous leap” of the more recent half century. “This wisdom has been with us over the centuries, but we are at a new moment in our collective capacity to transition to this next stage,” she said.

At various times throughout the three days, participants had opportunities to join Zoom conversations or group meetings to exchange insights.

Sister Edith Bogue, sociologist and associate director of the retreat center at Sacred Heart Monastery of Cullman, Alabama, presented her paper, “Building the Next Ways Forward,” remotely in the afternoon.

“We are in the midst of a long journey,” Sister Edith stated after providing an overview of the past century’s journey for Benedictine women. While data shows Benedictine life is undergoing deep technological, ecological, and existential change, “many religious don’t think there’s a problem at all,” she said, quoting Luisa Saffiotti.

Benedictines must be curious about what is currently happening, Sister Edith detailed, willing to explore their stories and to deal with the oft-debilitating nostalgia for times past, clinging to old tools because that is what is known.

Sister Edith explained the way forward for Benedictines is not determined by a road map, where it’s possible to see the destination, but through experimentation, observation, hospitality to new people and ideas, and reclaiming the monastic tradition “from the WEIRD [Western, Educated, Industrial, Rich, Democratic] culture it lives in.”

People often pull back because they’re anxious where life will lead them, she added.

“Emergence coalesces around identity, which is a strong and lively sense of what it means to be Benedictine,” Sister Edith said. This identity needs to be larger than a tagline, big enough to guide a decision.

“Numbers are not the most important thing,” she continued. “Our demographics don’t need to alarm us—communities called forth in the future will be confident of their place in the church and the world.”

She finds great hope in those who practice Benedictine spirituality, sometimes without even being aware of the Benedictine tradition. “What we are called to do is put one foot in front of another,” she said, while a key component to future developments is how people react to the adventure Benedictines are living now.

Sister Linda Romey of the Erie Benedictines in Pennsylvania spoke first on June 23, sharing her wisdom on the necessity of consciously changing the way people see, and how history is interpreted by an individual’s past experience.

An overview of world and church history led Sister Linda to point out how the 1960s and 1970s were a time when people began questioning assumptions at all levels, from racism to the role of women, gender, and climate. “Are we a called to be a people who question?” she proposed.

Drawing from the desert fathers and mothers, she cited how they felt the same pull in their hearts as many in the modern world toward the spiritual, adding that those who follow St. Benedict must be as idealistic as the desert elders.

“We must detach from what distracts us from our God-quest,” Sister Linda said. “The only opportunity to love is in this moment.”

Addressing the Way Forward, Katie Gordon, a founding member of Nuns and Nones who lives and works with the Erie Benedictines, expressed a desire to “go beyond categories of professed, oblates and seekers.” She sees how new groups gathering will create new conversations. 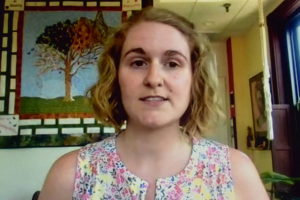 Katie Gordon of Nuns and Nones addresses the colloquium. Photo by Julie A. Ferraro

She described how in discussing these concepts with a friend, it was agreed what is being experienced is not a crisis of vocation, but a crisis of imagination. She hoped to help participants envision new possibilities of living the future now. She cited a number of residential and dispersed communities that are serving as “bridges” between traditional monastic life and innovative approaches.

Thursday’s afternoon presentation came all the way from Australia. Sister Patty Fawkner, congregational leader of the Sisters of the Good Samaritan of the Order of St. Benedict in Sydney, tailored her Witness talk on “What We Stand For.”

From the perspective of “down under,” Sister Patty highlighted how the First Nations peoples of Australia have a long history of dispossession and exclusion in their own country. The British, upon “discovering” Australia in 1770, declared it terra nullius—belonging to no one—and took it for their own, without regard to those already inhabiting it.

Sister Patty called on all those following St. Benedict, who she described as both a realist and an idealist, to bear witness according to his Rule, including honoring everyone, never giving a hollow greeting of peace, and testifying to the truth.

She urged everyone to read the signs of the times, especially when it comes to diversity. Primary among her examples was how human beings have destroyed diversity in nature by causing the extinction of thousands of species.

Another point involved recognizing how racism can be present “in subtle and insidious ways,” even in religious communities. “Jesus was amazingly comfortable with diversity,” Sister Patty said. “He went out of his way to be inclusive.”

She encouraged those listening to have the eyes to see potential, and hearts big enough to take the necessary risks to stand with those who deal with constant uncertainty in their lives and those on the margins.

To close the day, Sister Joanna Burley, prioress of the Benedictine Sisters in Bristow, Virginia, offered her review and response to the three presentations.

“Essentially, we are all seekers,” she said. She warned against restricting future potential by becoming stuck in a particular story, or becoming comfortable and complacent with what is seen as a certain identity and way of life.

Sister Joanna emphasized the need for Benedictines to become more for a hurting world. “We must be willing to be transformed forever.”

When it comes to Benedictines changing how the spirituality and charism are lived, Sister Joanna brought up the concept of letting go. “Renunciation is not a dirty word,” she noted, especially when what is carried is not helpful.

Her call to live authentically, rooted in the Gospel and in St. Benedict’s own directive from Chapter 4 of his Rule, “Your way of acting should be different from the world’s way,” provided additional food for thought.

The colloquium ended on June 24 with Zoom gatherings to offer feedback, comments, and closing prayers.

Colloquium organizers plan to publish the six presentations and two responses in book form, to serve as a valuable resource for future study. ♦

Top image: Sister Joanna Burley of the Benedictine Sisters in Bristow, Virginia, presents at the colloquium. Photo by Julie A. Ferraro

A Report from the AUSCP Annual Assembly: Day 3

Corruptions of the Heart by Nancy Enright
Scroll to top