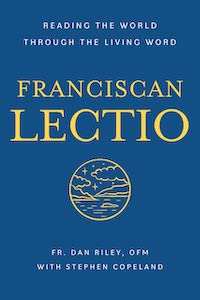 “Lectio Divina is a significant and rediscovered practice.”

This statement by Franciscan friar Fr. Dan Riley summarizes his purpose in authoring this book. Unfortunately, it’s not true.

Lectio divina has been practiced by Benedictine monastics—and laypeople—for over 1,500 years. While Riley mentions that briefly, crediting the “Desert Fathers and Mothers” with its origin, he mostly ignores the Benedictine influence, preferring to quote sources such as St. Clare, St. Bonaventure, Richard Rohr, Rainer Maria Rilke, Robert Lax, and Thich Nhat Than. Insights from Thomas Merton are the only Benedictine-related inclusion.

Riley admits at the start this is “not a how-to book.” He describes it as based in personal stories and experiences, “my longing to listen and learn from God within God’s world, to come to know who I am before God, and to come to know who we are as God’s people.”

If that were the case, he should have written a memoir, because this book steers the reader through a maze of thoughts that don’t always fit together, making it necessary to read and reread (though, to his credit, Riley does recommend the latter).

Riley has been a member of a small Franciscan community called Mt. Irenaeus, located in the Allegheny Mountains of western New York, for nearly 40 years. He travels with other friars and students from nearby St. Bonaventure University, sharing the lessons learned in community with the “marketplace”—a Franciscan tradition of spreading the Good News.

He does make a good effort to describe lectio, such as the statement, “Lectio Divina is an immediate, real-world encounter with the One who initiated all from the very beginning and authors all that is becoming.” What happens after such encouraging descriptions, however, is problematic.

Riley addresses the text to the reader directly, using “we” and “you” pronouns. He frequently includes questions for the reader in the paragraphs, where they might have been more effective had they stood alone. He brings in all manner of Franciscan spirituality, including cosmology—which is not a bad thing, except for how it’s developed.

“To enter into our place in the cosmos is to awaken to our interconnectedness with all other creatures—to become aware of all that we are listening and attending to, all that we are reading,” he writes in one of the four sections, titled “Gaze,” “Consider,” “Contemplate,” and “Imitate.” “Gaze” takes up the majority of the main text, with the other sections much shorter. An appendix on “Recipes” for lectio might have been a better basis for the entire book, delving into “Lectio of the Desert,” “Lectio of St. Clare,” “Lectio on the Road,” and even “Sidewalk Lectio” and “Lectio of the Mountain.”

With Franciscan spirituality being rooted in simplicity, Riley might have confined himself to elaborating on the four S’s of lectio that he briefly cites (solitude, silence, simplicity, and service), or the four W’s (watch, wonder, wait, and work). He tries, instead, to propose lectio as a remedy for the “existential angst” of this age, as a way to answer the questions of where humanity originated and why those questions exist.

The need to be loved is brought into the picture, with Riley stating, “Franciscan Lectio is not indifferent to the deep questions of love itself, as it looks for meaning.” He sees love at the core of lectio, which is a wonderful insight but soon meanders off on a tangent. When he veers back to the topic at hand, he describes lectio as helping “fashion a place not unlike how birds make nests,” a “place of repose and safety . . . where life comes forth.”

He uses a lot of such analogies, comparing lectio to running and so forth. The reader is left feeling that he is trying to elaborate on a subject that is best kept simple, as Benedictines have done for centuries. (In this spirit, he even writes at one point, “One of the geniuses of Lectio is its simplicity.”)

Pages dealing with the significance of the San Damiano cross—from which God gave St. Francis of Assisi the mandate to “Rebuild My House,” sparking his conversion of spirit—claim that icon-style image as the basis of Franciscan lectio. Riley writes of how, following his vision, Francis began “doing Lectio (though probably he wouldn’t have called it that).”

What Francis did was bathe himself in the words of scripture, absorbing them and reflecting them to everyone he encountered. The Little Poor Man strove to bring all people, all creation together in God’s love. Nothing more, nothing less.

To that end, Riley writes, “Lectio, especially as a communal prayer practice, acts as a balm in the sense that it cuts open our unhealthy thought patterns, idols and attachments,” and, “Lectio helps us to practice our coming into unity with our diversity, complexity, feeling, and thinking.” These are fantastic and thought-provoking observations, though the surrounding text tends to muddle their depth.

This book is more for those who are interested in Riley’s own life and spiritual journey, and Franciscan spirituality more generally. While there is certainly merit in these subjects, readers looking for a more focused account of the practice of lectio divinia may wish to seek out other sources. With a deeper historical and theological grounding, they can return to Riley’s story with renewed interest. ♦

Seeing the Church through the Webb Telescope by Gene Ciarlo

A Participatory Politics by William Droel
Scroll to top