Each November, as the lush leaves of autumn begin to give way to the gloom of a dead world without the luminous coat of snow, my thoughts turn to Tinker Creek.

Tinker Creek is a tributary of the Roanoke River in the Appalachian region of Virginia. It’s not very long. I’ve never been, but I’ve been there through the eyes of Annie Dillard, who I first met while reading her exuberant Pilgrim at Tinker Creek.

“Slow and shallow” is how Dillard describes this Edenic solitude. A tear-shaped island rests on the cheek of the creek, which boasts a cattail marsh along the edge. I’ve followed her eyes to descry water bugs in the shallows and frogs, snakes, and herons along the bank. Turtles and fish speak silently to the author, messengers of meaning in spite of (or perhaps because of) themselves.

The more I’ve read Annie Dillard, the more I find in her the deeply rooted American culture I’m not even sure exists. In her memoir An American Childhood, about coming of age in Pittsburgh at the intersection of three rivers, she claims the “Steel City” is the gateway to the Midwest and she grew up on its doorstep. She is in touch with old mountains, old land, the critters who live around them. “We are here on the planet only once, and might as well get a feel for the place,” she writes in a collection of meditations, Teaching a Stone to Talk.

Dillard was the first person to show me the kind of writing—and the kind of being-in-the-world—that ecologically-minded thinking could produce. Dillard’s prose met me like a morning: clear-minded, glorious, lush, and rooted. It’s the sort of writing that springs out of a certain kind of living: integrated. A Marian writer lives what she writes and writes what she lives—the words born into the world are the fruit of life, tilling the soil of her soil.

Dillard is a localist worth every ounce of Wendell Berry. But she is often overlooked because she skips the bombastic and the ideological, and she has no need for the doom-warning and hand-wringing that sells so well among the revivalist-influenced religion-commerce of the United States. Dillard is an apostle of what is. She spends very little time sharing with her readers what she thinks ought to be. Hers is a theology of presence. She sees. “I never saw a tree that was no tree in particular,” she writes in Pilgrim at Tinker Creek. All trees are a glorious particular. No tree is generic. All are lit up with the flames of the eternal that have touched each corner of nature with individual purpose and design—a cooperative member of a glorious whole.

Five years after I first met Dillard, I began to read another American journalist and disciple of the local, Dorothy Day. Day, like Dillard, is a deeply ecological thinker. Although she’s often described as a peace activist, communist, or labor journalist, Day is and was someone who saw the demands of her faith in environmental terms—something that called for collective action and communal conversion that begins with each particular person.

Day saw something wrong with the “dirty rotten system,” meaning that she saw the whole ecology of capitalism for what it is: a rotten environment that rots what it touches. The only way to flourish, to pursue virtue, was to build a new world. Which is what her Catholic Worker movement is trying its best to do: to create a new society in the shell of the old.

Day created the Catholic Worker first as a newspaper for clarification of thought. She published the first issue less than six months after meeting Peter Maurin, a well-read French peasant who had experienced first-hand the harsh realities of America’s industrial age. On the feast of the Immaculate Conception, Day prayed in Mary’s titular Basilica in Washington, D.C., for a way to live her faith and serve the poor and downtrodden.

“I felt that the Church was the Church of the poor, but at the same time, I felt that it did not set its face against a social order which made so much charity in the present sense of the word necessary,” she writes in The Long Loneliness. “I felt that charity was a word to choke over. Who wanted charity? And it was not just human pride but a strong sense of man’s dignity and worth, and what was due to him in justice, that made me resent, rather than feel proud of so mighty a sum total of Catholic institutions.”

Day looked for those who shared her belief in the fellowship of all creation in the breaking of the bread to also share her conviction that virtue didn’t mean just doling out the extra fat to those who depended upon our care: justice demanded that those with much give to those with nothing what they needed. There was too much charity and too little justice, she noted.

When she returned to New York from her D.C. reporting assignment, she met Maurin, who educated her in the papal encyclicals and French humanism, and drew upon her love of saintly reformers like Teresa of Ávila and Catherine of Siena to inspire her and indoctrinate her into a faith that moved in the world.

Maurin’s program could be summed up in “Three C’s”: cult, culture, and cultivation. In many ways, he called for overly industrializing Americans to become more peasant-like:

What I propose
is that Catholics
should take up
this back-to-the-land problem
and put it into operation.

Why Catholics?
Because they realize
more clearly than any others
the shortcomings
of the old capitalist
industrial system.

In this “Easy Essay” entitled “Up to Catholics,” Maurin seems to have high expectations for Catholics’ comprehension of the shortcomings of our capitalist system. He continues:

They alone understand
that while the family
is the primary social unit,
the community comes next. 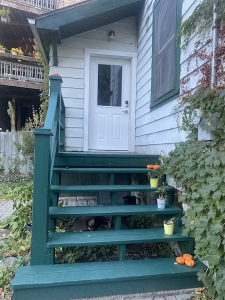 If only “family values” continued to mean preserving our communities as organizations of cultivation and mutual aid and critique of our violently competitive capitalist economic system.

Capitalism divorces us and alienates us from one another and from our natural rhythms of life in the land. A peasant, on the other hand, knows her land, lives in rhythm with it, and accepts its limitations, cultivating it within its boundaries.

Like Maurin, Dillard is a peasant philosopher. She planted the seeds of ecological thinking deeply within me. I have always grown up among trees, and though I have found myself in urban environments over the past decade, through the lenses of Dillard’s texts I have found hints of nature pushing through Manhattan’s cracked concrete.

In always reminding me to pay attention to where I am, Dillard taught me to look at birds and tree blights with compassion, and so to see my fellow humans with such eyes. Once you begin to look at the world as precious and lovable, it is hard to draw boundaries around what can be lovable. All becomes beauty.

Today I live at St. Francis Catholic Worker House in Chicago. How I got here is a love story: a very human story of romance and a story of God’s love for us. Living in this Catholic Worker House, I continue to see God in the land. Our backyard is full of goldfinches, hummingbirds, and squirrels. I spend an hour clearing soil of irises and violet roots: a plot we can then turn into a vegetable garden and plant milkweed for the monarchs on migration.

I also see God in John, who gives us food and ventures out into freezing wind to fetch cardboard for the woman who sleeps near him on the church steps. I smell God in the scent of unwashed clothing, the dank smell of sleeping outside that hangs around our neighbors. I hear God in laughter of guests over dinner. ♦

Renée Darline Roden holds a B.A. and M.T.S. in theology from the University of Notre Dame and an M.S. in journalism from Columbia University. She lives at St. Francis Catholic Worker House in Chicago.

The Lyric Forest by Frank Freeman

Synod Extended through 2024
Scroll to top