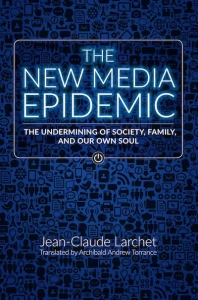 The New Media Epidemic: The Undermining of Society, Family, and Our Own Soul
By Jean-Claude Larchet
Holy Trinity Publications, 2019
$21.95   200 pp.

Sooner or later, you may find yourself on Facebook, scrolling through the dead. Billions of users worldwide are expected to pass on in coming decades, according to a study published this year in Big Data & Society, with the deceased outnumbering the living on the social media platform sometime before the end of the century.

Death happens. Try as it might, Silicon Valley has not fixed that bug. So Facebook emblazons the word “Remembering” across these profiles, and friends and family post tributes. A culture steeped in pixels assuages itself that death is not the end.

But something feels off about Uncle Larry’s critiques of airline baggage fees persisting on profit-driven servers long after he’s gone. Deleting his account doesn’t sit well either, implying as it might that death is the end. Maybe social media is incompatible with mortality. Death needs a body. Life online is mere light on glass.

Facebook’s user experience of death exposes cracks in the fiberoptic ties that bind us. Philosopher and patrologist Jean-Claude Larchet traces those cracks in The New Media Epidemic: The Undermining of Society, Family, and Our Own Soul (translated by Archibald Andrew Torrance). Our captivation with television, social media, smartphones, and the internet, Larchet argues, is cause, symptom, and beneficiary of a civilization that has lost its way. His widely defined “new media” distract us from what’s meaningful and leave us lonely, depressed, and physically unfit. They promise us connection but isolate instead. They build a new public square with one hand, and thumb through our emails with the other.

Larchet depicts a sprawling Gnostic error that pervades nearly every moment of 21st-century life: pixels, networks, algorithms, and fantasies subjugate the material, the tangible, the body—the real. “Unable to truly live with others,” Larchet writes, “homo connecticus creates his own world, a virtual one, in which he shuts himself up. It gives him pleasure for it is made to his measure, free from the constraints of the real world and the need to relate to others.”

If this sounds familiar, it’s because you may have read about our tech culture’s ill effects in any number of books, as well as the New Yorker, Wired, Harper’s, and many other publications. Perhaps you have experienced firsthand the weariness of checking your phone for no reason other than that time is passing and real life is hard. Even Apple and Google tout “digital wellbeing” features so, as Apple puts it, “you can make more informed decisions about how you use your devices, and set limits if you’d like to.”

Larchet’s book dutifully catalogs new media’s alleged crimes, leaning heavily on studies, philosophical treatises, literature, and news stories. Contemporary readers should recognize most of them, and they may be left wanting more than a compelling survey of established concerns (the original book in French was published in 2016, which might explain why some of Larchet’s points feel well-worn by 2019’s standards).

Some may also blanch at a perceived Luddism in Larchet’s diagnosis. It’s hard anymore to process new-media criticism without imagining a grizzled author muttering, “Kids these days . . .” That’s the trap of our culture’s technicism, which, as Larchet puts it, “sees technical development as the standard of human progress.” To criticize technology is to criticize progress, the logic goes. If you’re not careful, you’ll end up disheveled in a Montana shack writing screeds against the Industrial Revolution.

We do Larchet and ourselves a disservice if we succumb to knee-jerk accusations of technophobia. It is important to consider the costs and benefits of modern tools. Taken in earnest, Larchet’s book is a useful compendium of all the evil spirits that prowl about the World Wide Web seeking the ruin of souls.

The book shines when it deals with new media’s impact on spiritual life, an issue that is clearly near and dear to Larchet. In a religious vacuum, new media is a cult “without morals or ethics,” he writes, which promises immortality as a product “to be brought about not by the Grace of the all-powerful God but by the Promethean force of man, helped by the technologies he has invented to conquer nature.”

“This cult,” Larchet continues, “is not just theoretical since in practice many users give the new media a central place in their lives: the place that God should occupy in the normal religious life of the faithful.” The holocaust offered up to these electronic idols is a precious resource: attention. Our golden eyeballs fuel Facebook’s half-a-trillion-dollar valuation, and what do we get in return? Cambridge Analytica? Election 2016? Selfies?

Larchet’s cure is simple: abstinence. He cites the Psalms: “Let us break their bonds asunder, and cast away their cords from us.” Or at least let’s limit new media usage to “what is essential for our way of life,” he writes, and focus instead on prayer, fasting, almsgiving, and cultivating a will that rejects temptation and embraces silence.

I tend to agree. I quit social media sometime early last year, about the time I was converting to Catholicism. I don’t think the two events are unrelated. Jettisoning the feeds made space for God. God’s grace helped abate the twitching impulse to log back in. I sometimes wonder if my digital-only friends see my abandoned Twitter profile and think that I’m dead. There’s no “remembering” banner, but there’s also no activity since February 12, 2018. Of course, there is a death involved, a death to self. You can cite countless excuses for staying online. Or you can leave, and Larchet gives you 171 pages of reasons to do so. Opting out involves suffering, but “he who has suffered in the flesh has ceased from sin, so as to live the rest of the time in the flesh no longer for the lusts of men, but for the will of God” (1 Peter 4:1–2). Embrace the “fear of missing out.” Get bored. Disconnect!

David J. Unger is a writer based in Oak Park, Illinois. His work has appeared in Commonweal, the Christian Science Monitor, the Point, the Atlantic, and other publications.

On Beauty by Wally Swist

Literary Witness: A Review by Chris Byrd
Scroll to top