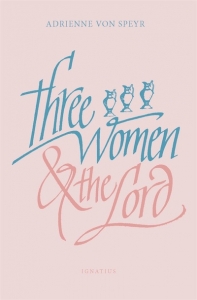 I often wonder about my purpose on this planet. What is God calling me to do? Have I done it already? How will I know? While I pray for God’s direction in my life and step obediently into the work he sets before me daily, at times I reflect on the biblical accounts of those people who encountered Christ and, as a result, were never the same.

Adrienne von Speyr’s classic book, Three Women and the Lord, recently reissued by Ignatius Press in a new edition with a foreword by radio host Kris McGregor, invites readers to explore a few of these stories. The cover of the book notes that von Speyr (1902–1967) was a “Swiss medical doctor, a convert to Catholicism, a mystic, and an author of more than 60 books on spirituality and theology.” She was also a great inspiration to the 20th-century theologian Hans Urs Von Balthasar, with whom she founded the secular institute the Community of St. John.

In this contemplative work, von Speyr focuses on the deeper implications of the stories of three women who encounter Jesus in unique ways in the Gospel passages. In detailing the interactions of Jesus with Mary Magdalene, the unnamed woman who washed Jesus’s feet with her tears and wiped them with her hair, and Mary of Bethany (the sister of Martha), the author shows how each fulfilled a specific calling of the Lord. Through their stories, these women illustrate the virtues of faith, hope, and love, respectively.

It seems that everyone, regardless of their religious background, has heard of Mary Magdalene. She encountered Jesus three times. On the first, he freed her of the seven demons which possessed her. After this, her life was in service to him. She joined Jesus’s mother Mary at the cross. When we see her again at the entombment of Christ, she witnesses the fulfillment of the Lord’s mission. As von Speyr points out, in beholding the empty tomb and then being visited by the risen Lord, the process of her faith plays out.

With some biblical personalities, it’s not the name we recognize but the story. Sometimes we are not even given a name. Von Speyr shows how the unnamed woman who was a sinner in the house of the Pharisee poured costly ointment on Jesus’s feet and wiped them with her tears. It is just as well she remains anonymous: she could be any one of us. She stands for each one of us as a sinner and offers us the hope conveyed in her story of God’s redemptive work in her life.

Lastly, in the story of Mary of Bethany, von Speyr shows us an example of such devoted love that it sets aside worldly concerns for that which is the “better portion.” This Mary, too, anoints Jesus’s feet with costly nard. Judas Iscariot criticizes her for this seemingly prodigal demonstration of devotion. Jesus’s response is to “let her be,” to let her show her extravagant love for him.

Von Speyr speaks to the fact that even before these women fulfilled their calling, and whether or not they were even vaguely aware that they were to be used by the Lord for his holy purposes, they were being carried by him. Who does God choose to serve him in bringing his kingdom to earth? Could it be one of us? Only he knows. “Between every person and the Lord there is a mystery,” von Speyr writes, “and everyone is entitled to privacy and silence.”

Through the author’s careful contemplation of each of these women’s accounts, we see that nothing is arbitrary with God. Everything is deliberate, a part of his plan, his story of redemption. In this way, she draws us into her meditation with her. The whole volume is, in its way, a meditation, drawing us into the scene and illuminating facets of the Father’s love for us through examples of faith, hope, and love.

As we meditate on the poignant stories of these three women, we may even be challenged to consider where we fit into the Gospel story, what God is calling us to do for him. “He not only redeems believers, he incorporates them into his work as collaborators,” von Speyr states; and elsewhere, “Every person who meets him has been chosen to enter into this kingdom and receive a particular, personal mission.”

What themes has he revealed to us in our lives? Might we be an example of a Christian virtue in another person’s life? Whether we have realized our calling or not, I believe, along with von Speyr, that God does, indeed, carry us. And that in itself is a reason to rejoice.

Amy Nicholson hopes to encourage and inspire others through her writing. She has been published in Country Woman, the Old Schoolhouse, the Lookout, and other publications. In addition to writing and discovering grace in ordinary places, Amy substitute teaches. Visit her at amynicholson14.wordpress.com.

The Collapse of Time by Anne Kerrigan
Scroll to top