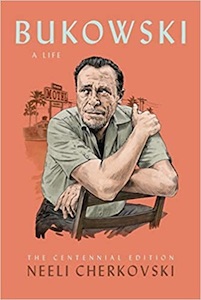 I am an inveterate reader of more than one book at a time, but I have never taken up another while reading one of Charles Bukowski’s. The same goes for Neeli Cherkovski’s Bukowski, A Life: The Centennial Edition, a “significantly rewritten” new edition of his 1991 original Hank: The Life of Charles Bukowski. In this new work, Cherkovski dramatizes many episodes from Bukowski’s life, gleaned from both Bukowski’s writing and the hundreds of interviews Cherkovski taped with him over the years. The biography is also partly a memoir of Cherkovski’s friendship with Bukowski, though the latter’s irascibility soured their relationship in later years.

Cherkovski relates in his preface how “a poet in my writing workshop said that she found a spiritual element in Bukowski.” He continues:

We discussed certain poems that have the quality of all lasting writing, an ability to render the world in a new way. Shortly after talking to my student, I came across an interview in which Hank [Bukowski] spoke of Los Angeles as a spiritual city. I realized that this non-religious man, by virtue of his being a poet, possessed many of the characteristics of a spiritual guide. The pugnacious side of Bukowski would cringe at the thought, I am sure, but it is there. In his death, I hear him clearly. His voice comes to me resonant, full of unforced authority, a message of endurance, self-reliance, and honesty of expression. At the same time, he is also saying, “Poetry is a dirty dishrag. Keep laughing at yourself on the way out the door.”

This is to say that Bukowski is a preacher, a preacher of endurance, anger, honesty; of not buckling under the system, the milieu, wherein some of us find ourselves lost and oppressed.

Bukowski was born in Andernach, Germany, in 1920 to a German-American GI and his German wife. The family moved back to the United States soon thereafter and eventually settled in Southern California. Bukowski’s father was a cynical tyrant and his mother never fought back or argued with him. There is a story of how his father would make him mow the lawn and tell him that not one blade of grass should stick up over the others. When the boy was through, he would kneel down to examine the lawn sideways; his mother, too, would kneel, and corroborate her husband’s inevitable sighting of errant blades of grass.

The boy, then known as Hank, grew up an outsider. He had few friends except the strange and odd ones who flocked to him, much to his annoyance. He was the boy whom the teachers always told to “wipe that sneer off your face.” More than one teacher noticed that he had a gift for writing, but he really didn’t respond to this until he discovered the public library in junior high school; he would later write that the library “provided a safe haven from the oppressive atmosphere at home and in school. The books seemed invincible, standing side by side, row after row. The chairs and tables in the library had a pungent, beautiful smell as the sun filtered in through the windows. The shadows and tonalities of light and darkness there seemed mysterious.”

In high school Bukowski developed a friendship with a student named Frank Sullivan, and together they began attending a Catholic catechism class. Eventually, though, Bukowski stopped going; in Cherkovski’s estimation, “the regimentation and dogma didn’t suit him, nor did he like a God who seemed so much like his father.” (Years later Bukowski would discover the work of the Catholic writer John Fante, who, Cherkovski says, “was destined to be perhaps the greatest influence on his own work.”)

During this time Bukowski discovered the pleasures and pains of alcohol; he also endured terrible acne. After high school, a short time at junior college, and stints working various odd jobs, he traveled for a number of years. He spent time in New Orleans and later Philadelphia, where he lived the material for his screenplay, Barfly, but he always came back to and finally settled in the Los Angeles area. Bukowski rarely kept a job long, usually cursing out his latest rule-crazed boss and leaving after a week or two. However, he did manage 12 years at the post office, an experience from which he excavated his first novel—which he promptly wrote in three weeks after quitting.

For years, like a working-class Borges, Bukowski wrote stories that were a mixture of real life and fantasy, but one night found himself banging out poems on his “typer.” He sent them out to little magazines, and in a few years had a solid reputation within a small community of readers and writers. Very reluctantly he started doing readings, before which he usually threw up; these were “well-lubricated” events which involved a lot of back-and-forth with the rowdy audiences.

A small publisher named John Martin—a churchgoing evangelical and founder of Black Sparrow Press—enjoyed Bukowski’s poetry and began publishing it in his famous handprinted editions. His offer of a monthly stipend helped the always-struggling writer devote more time to his work; soon he was writing novels, stories, and poems as his full-time occupation. He even got to go back to Germany for a well-publicized reading and, more important to him, a visit with his jovial Uncle Heine. And after years of wandering from woman to woman, he finally settled down with Linda Beighle, a devotee of the Indian spiritual teacher Meher Baba. He died of leukemia in 1994 in San Pedro, California.

Bukowski’s work is not for everyone. It is profane and raw, sexually graphic, and sometimes boorish and misogynistic. But it can also be wise, tender, moving, and very funny. Bukowski can nauseate you and lift your spirits in the same poem. He writes about those people—prostitutes, hard drinkers, “sinners”—with whom Jesus hung out the most. Christ said they were the sick who needed a physician, whereas the religious did not think they were sick. Bukowski reminds you that you are among the sick, kin with the “sinners” on the street and in low-rent apartments, the lost and the damned. As he wrote of himself in the poem “how is your heart?”:

during my worst times
on the park benches
in the jails
or living with whores
I always had this certain
contentment—
I wouldn’t call it
happiness—
it was more of an inner
balance
that settled for
whatever was occurring
…………………………
what matters most is
how well you
walk through the
fire.

A High and Lonely Destiny by Fran Salone-Pelletier

An American Catholic’s Reflections on the US Election by Fr. Louis Arceneaux,...
Scroll to top