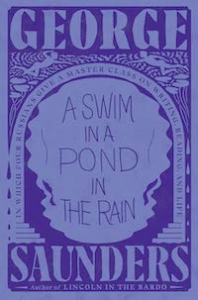 A Swim in a Pond in the Rain:
In Which Four Russians Give a Master Class
on Writing, Reading, and Life
By George Saunders
Random House, 2021
$28   432 pp.

To begin with the end: George Saunders ends the acknowledgments section of his new book, A Swim in the Pond in the Rain: In Which Four Russians Give a Master Class on Writing, Reading, and Life, by thanking you, “dear reader,” for all of your “hard work”:

. . . and let’s strive to remember and live by the lovely contradictory mantra below, of juxtaposed Gogol quotes (from “How the Two Ivans Quarreled” and “Nevsky Prospect,” respectively):

“It’s dreary in this world, ladies and gentlemen.”

“Marvelous is the working of our world!”

This is the kind of book this is: a funny, welcoming, and challenging journey through seven short stories by the “Russians” mentioned in the subtitle: Anton Chekhov (“In the Cart,” “The Darling,” and “Gooseberries”); Ivan Turgenev (“The Singers”); Leo Tolstoy (“Master and Man,” and “Alyosha the Pot”); and last but not least, Nikolai Gogol (“The Nose”). There is an introduction, “We Begin,” and an epilogue, “We End.” In between, each story is included for us to read, then a discussion followed by an afterword wherein Saunders deepens his reflections on the story in question.

In “We Begin,” Saunders says that the book is based on a class he has taught for 20 years at Syracuse University, then adds in “We End” that he found himself, in the writing process, thinking more deeply than he had before about each story. One surmises that the main discussions of these stories consist of thoughts that have been batted around the classroom over the years, with author’s latest thoughts included in the afterwords.

Whatever the case, the book is a feast for readers and writers or both. Saunders—who writes primarily short fiction and essays, and whose first novel, Lincoln in the Bardo, won the Booker Prize in 2017—is one of the quirkiest, funniest, and most moving writers working today. Lincoln in the Bardo told the story of Abraham Lincoln visiting his deceased son, Willie, and of his grief, but it also told the stories of other souls swirling around the graveyard and what they thought of this tall, gaunt man weeping over his child. Though he grew up Catholic (and even thanks two nuns in the acknowledgements!), Saunders is now a Tibetan Buddhist. One can pick up on the teachings of the Buddha in his stories, but he is never heavy handed; in a way, I find him to be a sort of Buddhist Flannery O’Connor.

The book’s title comes from an event in Chekhov’s story “Gooseberries.” In the story, two friends, Ivan, a veterinarian, and Burkin, a high school teacher, are out hunting in the Russian countryside with their dogs when a rainstorm sweeps in. They head for a neighboring farm where a friend of theirs, Alyohin, lives. He welcomes them enthusiastically, they go to the bathhouse where Alyohin bathes, and then Ivan takes a dip in the pond while it continues to rain:

Ivan Ivanych came out of the cabin, plunged into the water with a splash and swam in the rain, thrusting his arms out wide; he raised waves on which white lilies swayed. He swam out to the middle of the river and dived and a minute later came up in another spot and swam on and kept diving, trying to touch bottom. “By God!” he kept repeating delightedly, “by God!” He swam to the mill, spoke to the peasants there, and turned back and in the middle of the river lay floating, exposing his face to the rain. Burkin and Alyohin were already dressed and ready to leave, but he kept on swimming and diving. “By God!” he kept exclaiming, “Lord, have mercy on me.”

“You’ve had enough!” Burkin shouted to him.

They go into the house for tea. As they warm up, Ivan tells them the story of his brother, Nikolay, who worked in a city as a civil servant but always dreamed of a life in the country where he could eat his own gooseberries. This dream became an idol for him, and he sacrificed everything—even marrying a wealthy older woman whom he basically killed with his frugality—until, finally, he one day got his farm. When Ivan went to visit him, Nikolay served him gooseberries he obviously relished, but to Ivan tasted sour. As he went to bed that night, he could hear his brother gobbling down gooseberries, and it made him think about happiness and its meaning.

As Ivan tells this story to Burkin and Alyohin, he grows passionately angry and pronounces that he’s tired of happiness, that happiness means other people are sad but the happy don’t notice. Finally, he implores Burkin, “do not cease to do good! There is no happiness and there should be none, and if life has a meaning and a purpose, that meaning and purpose is not our happiness but something greater and more rational. Do good!” We are told the story does not please Burkin and Alyohin, and the men go to bed. But Burkin cannot fall asleep because of the smell of burned tobacco in Ivan’s pipe, but also, it is implied, because of Ivan’s story.

When I first read the story, Ivan’s speech very much impressed and moved me, and I thought it was the “moral.” However, Saunders shows how Chekhov has, rather, woven a morally complex narrative. For wasn’t Ivan very happy while swimming? The story is a meditation on happiness, but, as Saunders explains, it “is not there to tell us what to think about happiness. It is there to help us think about it. It is, we might say, a structure to help us think.” Saunders shows how each major character has contradictory traits: Ivan clearly experiences happiness while swimming, but then preaches against it; Alyohin seems happy but also a bit restricted by his primitive, dirty farming life; and Burkin is kind of a “killjoy” for yelling at Ivan to get out of the pond and then criticizing his story (yet can’t get to sleep because of it).

Saunders believes that Chekhov wants to warn us against becoming too set in our views—about happiness in this story, but really about anything. “If he has a program, it’s being wary of having a program,” Saunders writes of Chekhov; though Tolstoy criticized him for not having “any very definite attitude toward life,”

this quality is what we love him for now. In a world full of people who seem to know everything, passionately, based on little (often slanted) information, where certainty is often mistaken for power, what a relief it is to be in the company of someone confident enough to stay unsure (that is, perpetually curious).

This assessment of Chekhov reminded me of a Charles Williams quote about an ancient Christian martyr, who, when faced with the sword, said, I don’t know Christianity is true, I believe it is true.

In the afterword to his discussion of “Gooseberries,” Saunders talks about the story from a writer’s point of view to consider questions of technique. He advocates a line-by-line revision process guided by what delights the writer, for whatever reason, without thinking too much about theme, character, and related concerns. He says this is how he revises, draft after draft after draft, until “every bit of it gets infused with some trace of” his “radical preference.” “The closest thing to a method I have to offer,” he writes, “is this: go forth and do what you please.”

To end with the beginning: In his preface, Saunders talks about how he first got deep into reading while working one summer in the oilfields near Amarillo, Texas. He read Grapes of Wrath, which made him think about how he and his coworkers were “the malformed detritus of capitalism, the necessary cost of doing business.” His conclusion is one of the best descriptions of the reading experience I have read, as well as a mission statement for the way the art of fiction can shape the art of living:

The Russians, when I found them a few years later, worked on me the same way. They seemed to regard fiction not as something decorative but as a vital moral-ethical tool. They changed you when you read them, made the world seem to be telling a different, more interesting story, a story in which you might play a meaningful part, and in which you had responsibilities.

Easter: A Season and a Way of Life by Stephen B. Kass
Scroll to top