Summer is fast approaching, and with it comes the chance to catch up on some reading. All this week, we will be featuring reviews of new books as well as some pieces that reacquaint us with older ones. In our initial feature, Frank Freeman takes a look at a recent collection from the acclaimed Michigan poet Thomas Lynch—Ed. 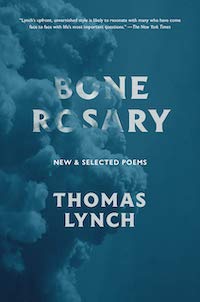 I did not realize this until I read Thomas Lynch’s new book of poetry, Bone Rosary, and wondered, Just what is a bone rosary? As it turns out, the “bone rosaries” Lynch makes at his home on Mullett Lake in northern Michigan are made of soup bones his dog gnaws and licks clean, which he then strings on a rope and hangs off a fulcrum that was once part of a now-defunct dock on his land. He writes of this in the book’s introduction, of how he hopes the bones will deter “extremist pike fishermen and watersports jihadis” from attacking his solitude. But the soup-bone rosary also reminds him of a nun he had for a teacher in the sixth grade who wore a rosary on her hip and on whom he had a schoolboy crush focused on “the bump of her bottom and ample breast.” This points to one of the recurring themes of Lynch’s work: the intertwining of the spiritual and the physical.

Elsewhere in his introduction, Lynch quotes William Wordsworth on how writing poetry within the framework of a form can provide a poet freedom—“Nuns fret not at their convent’s narrow rooms”—but he also quotes William Carlos Williams: “No ideas but in things.” Lynch strives to apply both dictums, so that “Poetry, like prayer, might raise language into the face of creation.” He continues:

“The spiritual life,” Bill W. wrote in the text of a fellowship [AA] I’m a member of, “is not a theory, we have to live it.” The poems here—gathered from books published across three decades—are connected to that spiritual life, their faith claims are in the life of language and its power to make us known to one another and to ourselves.

In the end, my bone rosary is an emblem of what moments of poetry have always meant to me, to wit, a connection where no connection seemed to be, the open beckoning welcome of a new reality, hail and full of grace in which the stuff of creation ceaselessly beats.

Lynch is a retired undertaker from Milford, Michigan, the author of five books of poetry, six books of nonfiction, and one of fiction. His most famous book is The Undertaking: Life Studies from the Dismal Trade, published in 1997 and a finalist for the National Book Award. I am most partial, however, to Booking Passage: We Irish & Americans, a combination of memoir, history, ethnology, and poetry, and from which I picked up the notion that Lynch thinks of himself as primarily a poet. The last chapter of that book, “On Some Verses by Irish & Other Poets,” recounts his poetry apprenticeship and some of its highlights. As I read Booking Passage concurrently with Bone Rosary, various passages leapt out at me—passages that Lynch had used both as prose and as poetry, passages that explained some of the references in the poems, echoes between the texts that enriched my readings of both.

Written in 2005, with 9/11 still smoking in the background, Booking Passage also gives an additional framework for reading Lynch’s poetry. He speaks of how in the face of disasters, personal and worldwide, “The fresh word that is poetry remains. In the best and worst of times, it has been the work of poets that sees us through.” In our linear lives, “poetry is the thing that twists history and geography and memory free of such plodding.” “It’s all a metaphor,” he says, reminding me of a scene in Robert Stone’s novel, Dog Soldiers, where a character sees scrawled in a cave devoted to hidden ceremonies of a late ’60s drug cult the phrase There are no metaphors. One is a view of heaven, the other of hell.

There is both heaven and hell in Lynch’s poems, but the general drift is toward the heavenly. He is a formal poet, but a very relaxed one. He writes sonnets—some rhyme, some don’t—and many narrative poems written in blank verse that put one in mind of Robert Frost. There are echoes of many poets in his poetry—Yeats, Heaney, Berryman, Roethke, not to mention Wordsworth and Williams. One thing that stands out is his devotion to the body, the flesh of our souls, and to the so-called “ordinary” things in life. He seems to me to be saying, as the Zen master once did, that the miracle is not to walk on water but on earth. As he writes in the poem “Still Life In Milford—Oil On Canvas By Lester Johnson,” “the ordinary becomes a celebration.”

In analyzing the poetry itself, I will focus on one long poem from Lynch’s third collection, Still Life in Milford, “The Moveen Notebook.” The poem is dedicated to Nora Lynch, a distant cousin who was the first relative from Ireland that Lynch met when he visited the country in the early ’70s. It is both a remembrance of his many stays with Nora and her brother Tommy, and a history of the Lynch family in Moveen in County Clare. Here is how it opens:

When I first came, the old dog barked me back,
all fang and bristle and feigned attack.
I stood frozen in the road. The taxi man,
counting his crisp punt notes from Shannon said,
“Go on boy. That’s your people now.” I went.

What follows a history of the family he has come back to: the “Mary Ellens, Michaels, Sinons, Dans, Pats, Toms”; how some “had” to marry and move far out “beyond the range of gossip”; the reference to a family tragedy: “And when Dan died young and Mary Ellen, swept / from the ledge-rocks at Doonlicky by / a freak wave when they were picking seagrass / to green the haggards with.” There are lines about how Lynch’s great-grandfather, “Nora’s Uncle Tom,” “sailed for Michigan,” and how “Nora, twisting these relations round, once said: / ‘Twas Tom that went and Tom that would come back.’” This recounting of history, in both factual and wistful manner, might “seem unnecessary now,”

at the end of yet another century
on the brink of this brand-new millennium
trying to set these lives and times into
Life and Time in the much larger sense:
those ineluctable modalities
that joyous man said we were given to:
how we repeat ourselves, like stars in the dark night,
and after Darwin, Freud, and Popes and worlds at war,
we are still our fathers’ sons and daughters
still our mothers’ darling girls and boys,
aging first, then aged, then ageless.
We bury our dead and then become them.

I like the sardonic reference to T. S. Eliot, “that joyous man,” but more so the idea that we repeat ourselves “like stars in the night.” In his introduction, Lynch speaks of poetic moments as forging “a connection where no connection seemed to be,” and these lines offer an example of a connection between parts of the universe, ourselves and the stars, and between the living and the dead.

Lynch continues the poem with a description of his stay in Ireland, how Nora and Tommy lived with an open fire in the kitchen with a hole in the roof above it:

Nora hung huge pots and kettles from the crane
and settled them into the fire coals
to boil chicken, cabbage, potatoes
or bake the soda bread or steep the tea.
Or boil water for the cow that calved
or mare that foaled or whatever hatched
in what seem to me endless nativity
presided over by my distant cousins. . . .

Tommy dies, the funeral is described, and there follows a meditation on death:

“Gone west”
is what the Clare folks call it when some old
client on the brink of dying sees
a long-dead mother in a daughter’s eyes
or hears God’s voice Himself in the free advice
some churchman mutters among final sacraments.
“Be stingy with the Lord and the Lord will be
stingy with you” is what Fr. Kenny said,
which was his careful way of putting forth
the theory that you get what you pay for.

Then, a little later:

“All winter we watch the fire,” Nora said.
“All summer we watch the sea.” Then she would sit
for hours hunched over, elbows to knees,
warming the palms of her hands to the fire,
smoking the cigarettes from the duty-free
shop in Kennedy I would always bring her.

You can’t better those first two lines. Lynch has acknowledged that in some way his Irish poems are based primarily on things Nora said. Upon rereading, what strikes the ear are the internal rhymes of “knees” and “duty-free” and “Kennedy”—all of which aurally suggest the word keen, both in the sense of a sharp object and a lament for the dead. Lynch and Nora talk about the ancestors who were swept off the ledge while harvesting seaweed, and Nora says plaintively, “I wonder if there’s anything at all. / I wonder if He hears us when we pray.”

In the final part of the poem, Lynch addresses Nora directly:

You approve, likewise, of how I stir the coals
and add the sods and stare into the fire.

Is what I see there what makes me reckon
the lives we live in counterclockwise turns,
better at elegy than commencement,
better at what was done that what’s to do?
To bury the dead must we first unearth them,
to see the bones still brittle in the dust,
the poor kite-work on which the poorer flesh
was hung? Is it afterward their voices
return to us in the words of others?
In the call of blackbirds or the noise of
Wind and rainfall at the window sash?
Is it in their silence that the leaf-fall’s
truth is spoken, the body’s hunger hushed,
as last night’s reddened coals turn whitened ash?
Is not the grave’s first utterance, “enough, enough”?

There are several other poems as strong as “The Moveen Notebook” in this collection. Lynch is a brilliant technician of poetry, but the techniques—as in the alliteration and the internal rhymes and the rhythms of the lines quoted above—never call attention to themselves; we keep reading because we want to know what he will say, what’s going to happen, what sounds he will sing. I can’t identify one rhyme that seemed forced or one enjambment that pulled me up short. Lynch never shows off, unless in satire and jest as in his poem “For the Ex-Wife on the Occasion of Her Birthday,” which burns your fingertips as you read.

So all I can do is return to what Lynch says in his introduction about the connections between ideas and things and how he expresses these connections in his poem, “Some Octaves on Holy Orders,” one of his new poems from the latest collection, Clouds of Witnesses:

And after fifty years, they look the same:
the thing itself, the idea of the thing,
the ancients and the infants, sinners, saints,
all fellow pilgrims, saved and suffering,
the passion and the passionate, the same
but different. Wherefore my surety:
The way and truth and life? Our holy orders?
The bottom line? God’s love. Love one another.

Belief and the Believer by Nicole d’Entremont