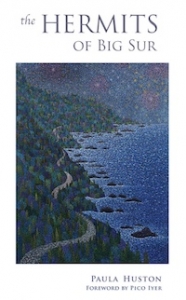 We tend to think of monasteries as places that shimmer off to the side of time. They are in the world, but only as witnesses of resistance against the world’s prevailing powers of avarice, ego, desecration, and noise. With their cultivation of communal life and fidelity to silence and prayer, they offer another—some would say better—way to structure our days in preparation for spiritual transformation.

While never disabusing us of these high monastic ideals, Paula Huston reminds us in her new book, The Hermits of Big Sur, that monasteries are institutions—and, like all institutions, subject to internal debate over mission. They require fundraising, strategic planning, and a host of other logistical processes we might not associate with images of cloistered monks and nuns. Far from detracting from the praiseworthiness of the monastic project, this insight makes us appreciate it all the more.

At its core, The Hermits of Big Sur is a history of the New Camaldoli Hermitage in Big Sur, California. Anyone who has traveled the length of State Route 1 along the sloping coastal range south of Monterey will be quick to recall the region’s beauty. (It makes the recent wildfires that decimated over a thousand acres that much more poignant, and their contributing cause of climate change that much more of an argument for the low-impact sustainability monastic life proposes.) Redwood canyons rise out of the glittering Pacific, where the surf breaks dramatically over—and, in the case of Keyhole Arch at Pfeiffer Beach, through—a scattering of shoreline boulders.

The monks of New Camaldoli belong to the Camaldolese order, founded in the 11th century by Saint Romauld as a development of the Benedictine tradition. Romauld envisioned a form of monastic life that would blend the solitary or hermetic path with the cenobitic or communal one. From a mountain fastness high in the Apennines north of Arezzo, Italy, he perfected this vision among his followers. Monks moved between the hermitage known as the Sacro Eremo and the guesthouse and collective quarters further down the mountain. The solitude and silence of the one would inspire the charitable outreach of the other, which would in turn flow over into a craving for solitude. Added to community and solitude was a third part of the Romauldian charism, missionary-martyrdom, a sort of vocation within a vocation that was meant to help a monk discover what unique gift he could offer his brethren in solidarity.

Transplanting this nearly thousand-year-old way of life into the consumerist chaos of midcentury America was no easy task. Huston introduces us to Dom Agostino Modotti, a Camaldolese hermit and ex-Jesuit who is selected to lead the effort. Upon arriving to the U.S. in 1958, he promptly goes about making the necessary ecclesial (Fulton J. Sheen) and secular (Bob Hope, Cecil B. DeMille) fundraising connections. After a series of complicated real estate transactions, the order is able to purchase a section of the Lucia Ranch in Big Sur as a site for their new foundation.

Things appear to be off and running. But Modotti, a lightning rod for controversy whose life, at times, reads like a Graham Greene novel—there are pastoral assignments to far-flung places, periods of enforced solitary confinement, and (once) a high-speed chase with Australian Military Intelligence—soon clashes with his superior, prior general of the Camaldolese Anselmo Giabbani, over the direction of the nascent community. In a rift that would replay itself over and over in various spheres of the post–Vatican II church, the traditionalist Modotti clings to the order’s hermetic ideal, while Giabbani, a devotee of ressourcement theologians like Henri de Lubac and Yves Congar, envisions a “more nuanced, complex, and open-minded” monastic spirituality that responds to the signs of the times.

The fallout from all of this happens remarkably quickly: within two years of establishing New Camaldoli, Modotti is ordered back to Rome, dispensed of his vows, and relocated to Puerto Rico where he starts a seminary. A new prior is appointed, Dom Clemente Roggi, and the hermitage carries on with a growing group of postulants. In Huston’s telling, the struggles of this early period are the crucible in which the community is formed: in having been asked to accept so much on faith, the young monks who would make up the core of New Camaldoli for the next several decades had learned firsthand the need for abandonment to divine providence that leads to inner peace.

Though there would be more internal debates ahead on the role of laypeople, especially women, within the life of the community and the right balance between ecumenical dialogue and fidelity to tradition, the bulk of the post-1960 narrative is one of “journeying together,” both within the hermitage itself and between the hermitage and a world to which it grows ever more open. Huston’s background as a novelist shines in these sections, as she relates the stories of individual monks all seeking that elusive balance between solitude, community, and their own version of the Romauldian “Third Good” to round out their monastic calling. For some monks, like Robert Hale and Michael Fish, this will involve travel and teaching; others like Thomas Matus develop gifts for scholarship, translation, and liturgy.

In a time when humanity is facing so many intersecting crises, the wisdom of monastic life offers not only a spiritual but a practical model for cultivating the common good. Huston’s account of New Camaldoli shows us that holiness is a daily effort, difficult and at times obscured by false starts and circuitous routes, that “requires years of slow, painful un-selfing.” As we watch the hermits of Big Sur move toward greater freedom rooted in self-giving, we find a vision and a template for the “practice of the privilege of love”—one that, humbly emulated within the particular circumstances of our lives, might be the leaven that restores direction to a hurt and driftless world.

Monarchs, Memories, and Me by Fran Salone-Pelletier

Words and Music: On the Work of Niall Williams by Leonard Engel
Scroll to top