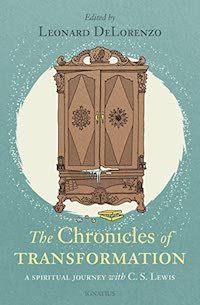 There’s not much that can induce a night owl like me to wake up extra early, so you know if I do to read, it must be a great book. When I was about nine, before getting ready for school (even beating my alarm clock to the punch), I put aside a special block of time to read The Chronicles of Narnia. Those sacred morning moments, carefully turning crisp pages under the soft glow of lamplight, were savored. And I wasn’t the only one who was transfixed by the world of C. S. Lewis’s creation. As the new essay collection The Chronicles of Transformation: A Spiritual Journey with C. S. Lewis attests, the classic fiction series continues to delight the hearts, minds, and souls of children and adults alike—because no matter how old, one can always be newly transformed.

In a world saturated with technology, propelled towards all that is new, what is it that keeps us poised for another trip through the wardrobe, ready to return to the realm of Narnia, so steeped in time and tradition? The Chronicles of Transformation answers this question through seven distinct essays, one written about each of the books in the Narnia canon. Sequenced according to the publication order of the books (not the chronological order of the stories), the essays explore the progression of Lewis’s themes throughout the series, investigating how his spirituality shaped them. So, too, the seven authors of the essays all uniquely come to define just how Lewis’s Narnia books, aimed at children, impact the adult reader’s spirit on a profounder level by unveiling what spiritual truths lie behind the wardrobe.

Through these essays, the reader comes to further understand Lewis’s background and inspiration, with regard to how he infused himself into each volume as well as to how he strove to form consciences by instructing children on the impact of their actions, and thus the significance of orienting them towards Christ. It’s in becoming acquainted with Lewis, and the lessons he imparted to children in Narnia, that readers learn more about the God he adored, as DeLorenzo describes as

what it means to love the one who calls them into being and who gives them a mission in life—a mission that matters on the grandest scale. What children learn in Narnia is the importance of remaining childlike. Narnia is a place where adults can always start over in relearning what is all too quickly forgotten.

A variety of literary scholars and professors tune in to reflect on the rich meaning of The Chronicles of Narnia, allowing for a balanced array of fresh insights into the timeless novels. Since several essays draw the same quotes from sources like Lewis’s letters, touching on similar points, there may be a sense of repetition at the outset, though the essayists ultimately expand upon them in new ways. While each essay takes a different approach to examining Narnia, homing in on different aspects, as a collection of pieces they are deeply interlinked. This sense of complementarity between pieces lends the collection a smooth flow, a unity enhanced by the illustrations and poems throughout.

Poet Madeline Infantine contributes a lovely, evocative seven-part poem, “On Knowing Him Here for a Little,” wherein one part is placed before each corresponding essay. Every part of the poem exemplifies a different aspect of Christ, spotlighting another facet of the gem that is his identity, serving to exhibit how he is portrayed in every volume of the series, and allowing readers to get to know him more. The effect is to set the tone for each chapter, referencing its central themes, while synthesizing the poiema (skill in language) and logos (meaning behind the artistry) that characterized Lewis’s work. Artist Stephen Barany’s whimsical ink illustrations have a similar effect in melding smaller parts of each story, tableaux, into a unified whole. Both the seven-part poem and the seven illustrations foreshadow the highlights of each essay and the volume on which they focus, but are best appreciated after having read the essays, when the many nuances of symbolic depth are clearer and the sequence is understood as one cohesive narrative.

Much like the variegated strands of melody singing creatures into existence in The Magician’s Nephew (the sixth chronicle in the series, which author Catherine Rose Cavadini discusses), these literary and artistic contributions interweave to build upon each other. Standing alone, the essays demonstrate thorough knowledge of the techniques and themes of each volume, but collectively, their strength is in illuminating how all of Lewis’s books come together as a tapestry to shed light on the longings of humanity for God. These essays are academic, yes, but not dry or so esoteric as to be inaccessible. Rather, they are imbued with feeling. Shared among the writers is a passion for excellent literature like that crafted by Lewis, but above all, it’s clear that there is an appreciation for the movement of God, the Holy Spirit, through inspiring works of art.

As they emphasize, Lewis’s intention was not for the Narnia books to merely be analyzed, but enjoyed, cherished. Like a journey through a beautiful landscape, the scenery should be felt, not simply pointed out. The essays comprising Chronicles of Transformation are not only erudite explications of Narnia’s literary genius, but meditations on the series’ staying power that revel in the majesty of Lewis’s words in revealing the transformative love of Christ. Narnia’s magic is in its ability to keep opening up the reader’s imagination like the doors of the wardrobe, beyond what Lewis himself could have fathomed. As DeLorenzo observes in the collection’s preface: “There is something felicitously concordant between how Lewis’ more limited intentions were reshaped for a larger purpose, and how those who pass into Narnia within these stories are themselves reshaped.”

Aptly, some essays read as moving chronicles of personal transformation by including anecdotes of the authors’ individual connections to the Narnia series. Notable is editor Leonard DeLorenzo’s essay on the much-beloved first book of the series, The Lion, the Witch, and the Wardrobe. Seeing the story anew through the eyes of his child, DeLorenzo conveys the multilayered experience of reading the familiar narrative with another generation. Witnessing young readers’ hearts be awakened to the series’ powerful testament to the self-giving love of Christ, symbolized through the lion Aslan, deepens one’s own conviction, the capacity to feel and be as immersed in the story as children are. Lines from part IV of Madeline Infantine’s poem (prefacing the essay on The Silver Chair, the fourth book of the series) underscore this well: “His is the wild breath, / the gentle sign, / song to send sore bones home, to see / the sun, the stars, the sea, the trees / as if at first sight.” Through the story of Aslan’s sacrifice, imitating Christ’s, readers can see how one act of agapic love sets in motion a chain of conversions, with others seeing how they have been freed by Christ’s love, taking their own actions to better love others.

Critics might claim that “fairytales” like Narnia take one out of reality, but, as Lewis showed and the essayists affirm, they can help us notice all that is beautiful in this world of God’s creation, spurring us to seek Christ beyond the stories of Aslan, in real life. Lewis’s ultimate end is to direct attention to the world beyond this, the heavenly realm that Narnia comes to be, with the wardrobe functioning as a bridge between the earthly and celestial. Suspension of disbelief in the fantastical events of the series is an entry point for faith, helping one to see that the events aren’t so farfetched after all, that it’s never too late for conversion, never impossible to turn away from sin. As characters like Edmund from The Lion, the Witch, and the Wardrobe undergo their own metamorphoses that mirror Lewis’s own conversion, their souls gain new life, revitalized through self-sacrifice stemming from merciful love. Hearts aflame with love for God, they are enabled to share it.

Sharing books like the Narnia series, and this essay collection celebrating it, are sure to inspire greater love. The kingdom of Narnia is an antidote to world-weariness, restoring hope. Its ageless splendor is meant to reflect that of God, but the essays of The Chronicles of Transformation speak to the relevance of Lewis’s messages to today’s times, addressing worldly distortion of truth, education, and language. Together, the essays extract salient points from the Narnian chronicles, providing sage takeaways about how they teach readers to navigate a fallen world with a leonine fortitude equaling that of Aslan. The collection succeeds in its goal to encourage adults to revisit Narnia, rereading it with eyes of faith so that it is more than a nostalgic trip down memory lane but instead a way to honor the broader, most radiant mysteries of God.

In my journey through this book, I rediscovered the spirit of wonder that I had when first reading The Lion, the Witch, and the Wardrobe, a slice of heaven in the terrain thawed by Aslan’s spring sun. It captures the enchanting feel of being met with that initial glimpse of Narnia, a snow-laced land lit softly by streetlamps, spirits lifted by warm tea in Mr. Tumnus’s house. Once drawn in to the pages of The Chronicles of Transformation, I was reluctant to leave. ♦

Kathryn Sadakierski’s writing has appeared in Agape Review, DoveTales, Edge of Faith, Ekstasis Magazine, enLIVEN Devotionals, Refresh Bible Study Magazine, and elsewhere. She holds a B.A. and M.S. from Bay Path University. Kathryn is passionate about sharing her love for God through her work, with the goal of making a positive impact.

Awake Milwaukee presents “Courageous Conversation” on the role of racism...

An Appointment with Modernity by William Droel
Scroll to top