Voice of the Faithful (VOTF) members from across the U.S. gathered on Saturday, October 29, at the Boston Marriott Newton Hotel in Newton, Massachusetts, to celebrate the organization’s 20th anniversary. VOTF is a lay organization of faithful Catholics with more than 30,000 members worldwide.

VOTF president Mary Pat Fox opened the day by reflecting on the group’s history and ongoing mission. Referencing the founding vision of VOTF, Fox said, “It took a lot of work and a lot of listening to come up with such a beautiful mission statement and goals that have stood the test of time.”

VOTF’s current initiatives include advocating for financial transparency and good governance in dioceses; protection of children and promotion of child protection standards; expansion of women’s roles in the church, including the restoration of the ordination of women deacons; and full participation in the Synod on Synodality through the ongoing Continental Phase.

Fox said that while many people “doubted lay participation” in the church 20 years ago, VOTF’s longstanding commitment to lay voices has made the organization “a prophet of synodality.” She said that “listening has always been the key” value of the organization, adding, “We have to keep synodality working and continuing.”

VOTF was recently named a “legitimate” Catholic organization by the US Conference of Catholic Bishops (USCCB). Fox said this is an indication that “the dioceses are listening” and that “bishops are trying to improve.”

VOTF leaders followed Fox’s remarks with updates on major VOTF programs, projects, and initiatives. Margaret Roylance, VOTF trustee and chair of the Finance Working Group, began with an overview of diocesan financial accountability and transparency. VOTF has worked in this area for more than 10 years and has published a report on the financial transparency of all 177 dioceses of the USCCB since 2017. The 2021 report is available here.

“If you can measure something, you can manage it,” Roylance said. She stated the goal of the VOTF’s annual financial transparency report was “holding dioceses accountable for the funds we give them.”

Roylance said that 115 dioceses had current audited financial reports available in VOTF’s most recent evaluation, up from 87 in 2017. She said that this was a sign that dioceses are taking VOTF’s recommendations seriously. Roylance also said that there is a correlation between a diocese’s financial transparency score and the contributions they receive. Higher scores lead to greater trust on the part of parishioners, who are then more likely to contribute.

Roylance concluded with a report on “Lay Involvement in Governance of the Church by and through the Diocesan Finance Council.” This survey, produced by VOTF in 2022, is the first ever to evaluate lay governance through the lens of diocesan finance councils. It examines whether dioceses are complying with a 1984 reform of the Code of Canon Law that requires each diocese to form a diocesan finance council and grant it duties to both “consent” and “consult” on certain matters. The councils are to include laypeople proficient in matters of finance, law, real estate, and related areas.

“We’re going to continue to demonstrate that we care,” Roylance said.

Patricia Gomez, VOTF trustee and co-chair of the Protection of Children Working Group, presented a report on measuring and ranking safe environment programs for children in dioceses. The Protection of Children Working Group was created in 2002 with a focus on abuse-prevention education. The group’s 2022 report is available at the VOTF website here.

Gomez explained how VOTF reviewed 177 diocesan programs to assess child safety. Ten questionnaire categories for scoring dioceses included whether child protection policies were posted on diocesan websites, whether there were clearly stated standards for background checks on all diocesan employees and volunteers, and the availability of published lists of accused clergy.

Points were assigned for each questionnaire category. The average score was 67 out of a possible 100. The Diocese of Harrisburg had the highest score of 95.5, and the Diocese of Shreveport was lowest at 22.5.

Gomez said that the goal of the report is to “inspire action.” She encouraged conference attendees to look up the score of their local diocese in the report and communicate their concerns to diocesan officials.

VOTF mailed the report to the USCCB in April. After the release of the report, VOTF received inquiries from 12 dioceses about how to improve their scores. Six bishops personally responded to the report, including one who thanked the group “for providing a tool to measure website content.” The Center for Applied Research in the Apostolate (CARA) also covered the report.

Joe Finn, a member of VOTF since its inception and resident of Wellesley Hills, Massachusetts, captured the importance of the working groups’ reports: “Voice of the Faithful is the only body on the face of the earth that I know of that is grading and ranking diocesan performance as to financial transparency, lay governance by and through the diocesan finance council, and the protection of children,” he told Today’s American Catholic.

VOTF trustee and chair of the Women’s Emerging Voices Working Group Svea Fraser shared updates on VOTF programs promoting women’s roles in the church. She invoked Saint Phoebe, a deaconess commended by Paul in chapter 16 of his Letter to the Romans, as “one of the invisible multitude in the communion of saints,” and introduced an upcoming “year of Saint Phoebe.”

Fraser spoke of VOTF’s close collaboration with Discerning Deacons, an organization dedicated to the collective discernment of women in the diaconate that began in 2020. VOTF has partnered with Discerning Deacons to host listening sessions and “deacon circles”—small groups who come together to promote the voices of women in leadership roles and advance the question of women in the diaconate through prayers, storytelling, and faith in the Holy Spirit.

Fraser said the group is inspired by the idea of the deacon “as the conscience of the church” and an “icon of the serving Christ.” European diaconal circles similar to those initiated by VOTF were crucial to the restoration of the diaconate by Pope Paul VI in 1967.

The question of women’s ordination to the diaconate has been identified as a key point of discernment for the global church in the Continental Phase of the Synod.

VOTF’s executive director Donna Doucette concluded the panel with a presentation on the organization’s contributions to the ongoing Synod on Synodality. “Synodality is a process, a way to be church,” she said.

VOTF began offering pilot synodal listening sessions in 2021. From January through May of 2022, they hosted 46 sessions which included 400 participants from 34 U.S. states and five other nations. Each session was limited to 10 people and included a trained facilitator and scribe. VOTF also reached out to relatives and friends of session attendees to receive opinions of former and lapsed Catholics.

The complete VOTF Synod report is available here. Key themes that emerged from the listening sessions included a yearning for Christ-centered local faith communities, greater welcoming and inclusion, and an elevation of lay voices and focus on social justice within the church.

Ducotte stressed that there were some nuances between the VOTF document and the National Synthesis document issued by the USCCB. The full implementation of Vatican II was a major point of the VOTF document but does not appear in the USCCB report. “Vatican II is a key to this synodal process,” she said.

She noted that Vatican II is a part of the recently issued Continental Phase document. The title of that document, “Enlarge the Space of Your Tent,” should be understood as “an admonition,” she said. 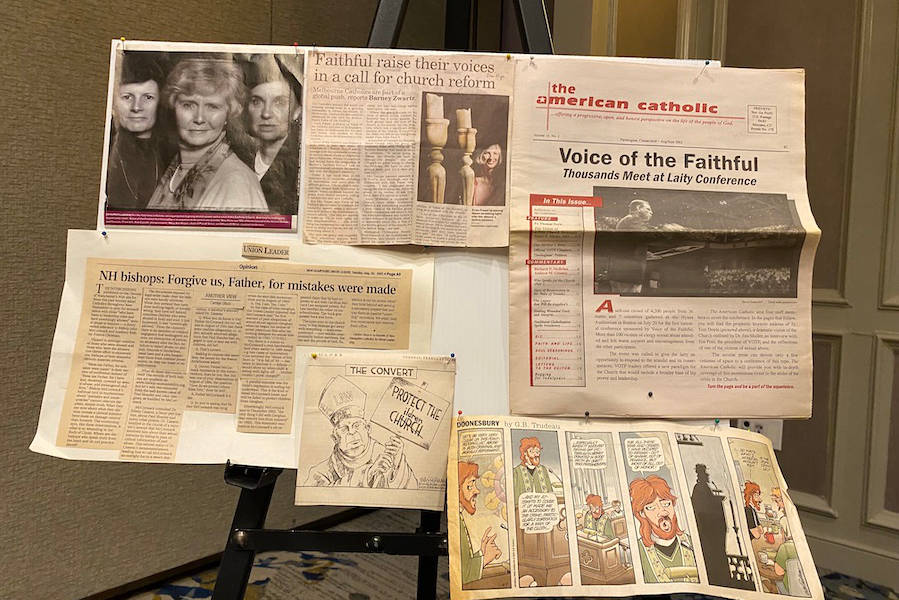 One of several displays of press coverage for VOTF at the 20th anniversary commemoration, including the August/September 2002 issue of TAC that covered the inaugural conference.

VOTF believes that the Continental Phase must be a dialogue between the universal and local church, and must involve the entire people of God. “Our part is not over,” Ducotte said. Synodality “is a process only if you keep participating” and “pushing bishops to fully embrace synodality as a way of being church.”

Quoting Sr. Nathalie Becquart, undersecretary to the General Secretariat of the Synod of Bishops, Ducotte added that “a synodal church is the inverse of a clerical church.”

Following lunch with grace offered by Dr. Phyllis Zagano, featured speaker Thomas H. Groome delivered an “interactive” keynote address, “Putting Jesus at the Heart of Keeping the Faith and Changing Church.” Dr. Groome is a professor of theology and religious education at Boston College, founding director of the Ph.D. program in theology and education, and an award-winning author of numerous books.

Dr. Groome’s presentation focused on the importance of recentering the historical Jesus as a guiding principle of Catholic Christian discipleship. “Faith is not something to keep to ourselves, but to give away,” he said. “The very heart of the faith that we’re to give away is Jesus.”

He continued, “One of the great agendas of Vatican II was to bring us the historical Jesus,” adding, “We shift perspective when we think historically.”

Dr. Groome related stories and images of the historical Jesus to set the context of his presentation. He spoke of the deficiencies of the Baltimore Catechism, the standard text for Catholic education through the 1960s, that was based solely on the Apostles’ Creed. “We grew up without a Christology,” he said.

Dr. Groome then led participants on a guided meditation. The centering image was Jesus on the road to Caesarea Philippi, where he questions his disciples, “Who do people say I am?” (Matt 16:13, Mark 8:27). Dr. Groome offered the insight that “Jesus was trying to understand his own messianic consciousness by asking others.”

Participants were given the opportunity to think about how they might answer Jesus’s question, both in its historical context and in the present day. “Jesus’s pedagogy engages people’s everyday lives in parables and analogies,” Dr. Groome said.

Dr. Groome elaborated on six key qualities of the historical Jesus: He taught God’s reign as the heart of his gospel; he modeled a deep compassion and justice for all; he affirmed the dignity and potential of every human person; he welcomed all to the table in a truly “catholic” fashion; he called on his followers to pray and worship the one true god; and he imparted a “forever hope” through the Resurrection.

The day concluded with a Mass celebrated by Rev. William Clark, S.J., an author and associate professor of religious studies at the College of the Holy Cross in Worcester, Massachusetts. Dr. Zagano served as acolyte, and the two delivered a dialogical homily in which they shared their reflections on the readings. Music was provided by the Paulist Center Boston Community Choir.

Even as VOTF was celebrating its 20th anniversary, the work of the group continued. Two days before the gathering, on October 27, VOTF released a statement of support commending New York Attorney General Letitia James for enforcing government oversight on the Diocese of Buffalo in dealing with clergy abuse allegations. ♦

The Obedience of Adam and Eve by O’Neill D’Cruz

Participating in God’s Being by Wally Swist
Scroll to top