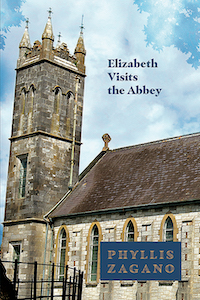 Plain and simple: every Catholic needs to read this book.

While promoted as being for pre-teens, and written somewhat in the style of popular chapter books found in grade-school libraries, the message contained in this slender volume needs to be shared with everyone who holds their faith dearly.

The main character of the story, Elizabeth, is the youngest daughter of Bill and Meg, who met in Ireland while Bill was traveling on business from America. Meg worked at the Dublin hotel where he stayed on these trips. After they married, the couple moved to America and started their family.

When Elizabeth is 12 years old, her parents take her on a vacation to Ireland, where Meg’s older sister is abbess of a Cistercian monastery near Cork. While becoming acquainted with her Aunt Marie on a visit to the abbey, and with wide-eyed wonder, the youngster learns about the historic role of women in the church, along with the men who put a stop to their vital ministry and denied them authority.

Author Phyllis Zagano rightly conveys the girl’s confusion at how sainted figures like Brigid and Hildegard of Bingen could be consecrated as abbesses, essentially holding equal power to bishops over the territory in which their monasteries were located, when modern women are rarely allowed to approach the altar.

Being American, in this time of divisive attitudes within the bishops’ conference and even some parishes, Elizabeth asks her aunt whether these women from centuries past were ordained as deacons.

The abbess explains, in no uncertain terms, that early popes took issue with women serving in this capacity and gradually put an end to it—including, most recently, in the 19th century, when Pope Pius IX completely stripped abbesses of all authority to appoint priests in the territory around their monasteries and manage church legal proceedings.

Elizabeth learns during her visit that Cistercian nuns, like all religious, are very human. The girl is stunned to see her aunt wearing sneakers with her habit. Some of the nuns like to chat, while others prefer silence. That these women use email boggles the youngster’s mind. The Irish abbey includes a farm, which many American monasteries also had in past years, though gone now due to reduced numbers.

Zagano captures the “city-in-miniature” ideal of the monastery within her narrative. In other words, she accurately describes life within monastery walls in the 21st century. Having visited many Benedictine and Cistercian communities over the decades, I have seen firsthand how monastics live, pray, support themselves through the work of their hands, and behave.

In addition to having written or edited over 25 books on religious studies and women’s issues in the church, translated into a variety of languages, Zagano holds master’s degrees in theology, communications, and literature. She joined Hofstra University in 2002, where she is an adjunct professor of religion and senior research associate-in-residence. She is a member of numerous Catholic theological organizations and served on the Papal Commission for the Study of Women in the Diaconate. Her syndicated column for Religion News Service is carried in the National Catholic Reporter and other publications around the globe.

Some who read this book might judge it as an attempt to push a certain agenda on others in the church. Zagano knows, through her extensive research, that women held fully sanctioned positions of authority within the church, including ordination as deacons, in past centuries, and there is no reason beyond the obstinacy of certain men why they should not again be allowed to serve in their well-deserved capacity.

The final line in chapter 26 is meant to make the reader reflect on what has been revealed in the pages before: “What do you think about women in the Church?”

It is something we all need to consider. ♦

Jesus: The Heart of Catholic Faith by Thomas Groome
Scroll to top