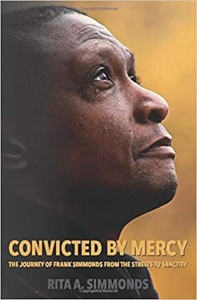 Convicted by Mercy:
The Journey of Frank Simmonds
from the Streets to Sanctity
By Rita A. Simmonds
Human Adventure Books, 2019
$18  300 pp.

I received this book for reviewing during the Covid-19 pandemic, a time when mercy was a commodity both desired and distant. As I began reading, my thoughts ran amok. They underscored a certain incredulity and vague disdain. Had I committed to read and comment upon a story with which I would have no connection? Would this be another of the “hell-to-heaven” tales replete with exaggerated piety? The promise to review it propelled me into and ultimately beyond my early dismay.

As I read, I was led into a unique experience of life with all its tears and joys, ups and downs, fears and faith. Although the details would not dovetail with my own life story, the core message of courageous trust could not be denied. In fact, it lies at the heart of the human story and is true of every love story.

This is the tangled and entangling tale of two people whose lives could not have been more different. Viewed on the surface level, no one would have imagined they could have been more than acquaintances, and even that connection would likely be flawed. How could it be possible that an aspirant to the religious community founded by St. Mother Teresa of Calcutta would venture beyond platonic friendship with a man who lived “on the streets, taking and selling drugs, crashing in crack houses . . . rats crawling over him, being dumped in a dumpster because ‘friends’ presumed him dead?” This is not a spoiler alert, but rather a quote from the introduction of the book.

The book’s importance lies in the fact that it presents an entwined saga. It is the story of both Frank Simmonds and his wife, Rita Flansburg Simmonds. It is an enmeshing of prose and poetry, both literally and figuratively. Additionally, it is an ongoing prayer for all humanity to learn life by heart. It is a heartsong played and sung to empower others as they are en route to an ever-deepening realization that God exists as love, in love, to love.

Frank came to that realization by begging for his own existence. He also learned that it is God’s mercy which makes us saints, not our capacity or action. His story, however, did not follow a straight path. It was replete with failures, battles, anger, compulsions, and suffering. As he often stated, “I am not St. Francis. I am Frank”—an extraordinarily ordinary human being. Suffering ultimately became his signature holiness, a cross he carried, humbly and authentically, as healing for a sin-sick world. It was his key to making a difference and having a purpose in life. It aided Frank in his desire to overcome divisions born of prejudice and bias.

Rita walked the way in tandem with Frank as his wife, adding poetry to his prose. As he let everyone speak the way they wanted to speak, believing that truth rose from within the personality of the other, Rita concretized the praise in poems. Each of them believed wholeheartedly that “prayer and religion must be experienced or it’s a dream.” Both lived in this profound expectancy: “I’m always looking for how God is going to touch my heart.”

Frank described, even defined, himself as a doorman. It was both his work in life and his lifework. Frank begged others to experience what he believed was true and crucial. He wanted everyone to “love without conditions and pray.” He opened the door for any and all who wished to enter more deeply into divinity, and he did so with graced smiles and grand suffering.

In the funeral homily for Frank Antonio Simmonds, Father Peter John Cameron, O.P. said: “He loved and lived his job as a vocation, patterned on the original Door-man Jesus Christ, who says of himself in the Gospel of John: I am the gate. Whoever enters through me will be saved and will come and go out and find pasture. The very way Frank would open that door and let residents and guests into that building where he worked was the concrete, personal sign to them of another, heavenly house where they were awaited and would be welcomed . . . a welcome that began in the gaze Frank gave to everyone who crossed his path.” They would find an inexhaustible pasture of caring and compassion in his presence.

Any and all suffering Frank endured was accepted as a blessing. He lived within the limitlessness of that bounty, in sickness and in health. His story is a narrative of life, the marriage of faith and fear, hope and hopelessness, dying and rising. It is, as well, a saga of profound simplicity.

In the January 23, 2015, edition of Il Sussidiario, George Vittadini wrote these words that encapsulate the reality of Frank Simmonds and his life offering to a world where superficiality and self-absorption often seem to erode the wholesomeness of our being: “In the modern world where cynicism and nihilism seem to have already won, as the newspapers, televisions, and columnists seem to say, Frank represents an authentically new world, where the desire for happiness and the strength of faith are victorious; where there is no circumstance that determines the social life of man, there is no race that divides, no degradation that cannot be escaped, and no disease that can destroy hope.”

The biographical memoir of Frank and Rita Simmonds’ life breeds a singular sanctity all can embrace, encourage, and empower. It defies any pandemic “dis-ease” as it declares a wholeness embedded in all creation. Like his Creator God, Frank saw what lay before him, all of it, and blessed it and declared it to be good. Read the book, live its goodness, and be convicted by mercy.

Fran Salone-Pelletier has a master’s degree in theology and is the author of Awakening to God: The Sunday Readings in Our Lives (a trilogy of scriptural meditations), lead volunteer chaplain at Novant Health Brunswick Medical Center, religious educator, retreat leader, lecturer, and grandmother of four. She can be reached at hope5@atmc.net.

A Personal Mission: A Review by Amy Nicholson

Discerning How to Vote as a Catholic by Fr. Louis Arceneaux, C.M.
Scroll to top