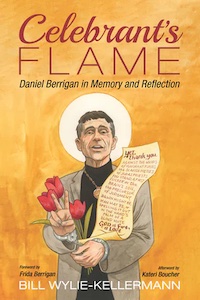 Where and how should we live? In this fascinating walk down memory lane, retired Methodist pastor Bill Wylie-Kellerman poses that question again and again, mostly querying Dan Berrigan, S.J., but also asking it of his colleagues, including himself, and ultimately of us.

In doing this, he has chronicled his long friendship with Father Berrigan, who is receiving great attention this year, the hundredth anniversary of his birth in May 1921. As a Jesuit, Father Berrigan taught many places, including Union Theological Seminary, where he singled out student William Wylie-Kellerman and became his mentor and years-long friend. Don’t give up, Father Berrigan said to many. Keep going. In his words: “Come along, we need you.”

Frida Berrigan, niece of Father Dan, tells us in her foreword that Wylie-Kellerman’s memories “repot” her in the rich soil we all need for perseverance. An afterword by Kateri Boucher, a young Detroit Catholic Worker and editor of the lively Geez magazine, acknowledges the sexism of the clerical and resistance communities which nurtured so many in the heady days of the Vietnam War, but sees that she can challenge their theology on her own terms and be grateful that Berrigan can still call her to life.

In the heart of the book, Wylie-Kellerman makes liberal use of both his own poems and prior writing and Father Berrigan’s poems and polemics. I write this as war flares once again between Israeli and the Palestinian peoples on land where they try to coexist in spite of continuing colonialization and destruction. In his autobiography To Dwell in Peace, Father Berrigan offered answers then that would serve us well now: “Israelis are entitled to more compassion with every day that passes. Their leadership on the other hand—religious, military, or political—is entitled to ever more contempt.” He, of course, was widely criticized for these words, but reading them through today’s lens, we see that they stand the test of time, as do his other plentiful writings.

This book is a collation, a colloquy, a compendium, a conversation with Father Berrigan. Like a conversation, it is sometimes repetitive. Some of the repetitions help it to coalesce; some seem unnecessary and could be omitted in the interests of cohesion. But look beyond them to the heart of the book, which is Father Berrigan himself and the pure and truthful teachings of his poetry, his prophecy, his life.

Like many who didn’t really know Father Berrigan personally, I didn’t fully appreciate his gifts until he left us. Wylie-Kellerman shows us how deeply he influenced others. The chapters are titled by Father Berrigan’s several realities: Teacher, Brother, Priest, Poet, Prisoner, Prophet, Friend, Contemplative, Inspiration.

Wylie-Kellerman explores Berrigan’s several dilemmas regarding obedience—obedience to the dictates of his Jesuit order forbidding him to participate in the civil rights movement and often exiling him to foreign lands; obedience to the callings of his heart; and ultimately obedience to what he felt Jesus was calling him to do and say and write and teach. “Always and everywhere, he was never not being a priest,” Wylie-Kellerman writes, including the moment of his prayer over the burning draft board files during the Catonsville Nine draft board raid, in which he and his brother Phil Berrigan participated.

Wylie-Kellerman labels these and other nonviolent direct actions, including Plowshares actions against nuclear weapons, as “liturgical,” and fittingly devotes several pages to the 1985 Eucharist under the wings of a B-25 nuclear-capable bomber at Wurtsmith Air Force Base in Michigan. As a participant in this action, he treats at length the process of discernment leading up to it. In the late ’80s, I interviewed Mary West, another participant in this holy action. As she told me in a testimony I later recorded in my 1993 book Voices from the Catholic Worker:

The seductive power of the [idols of war] is almost irresistible . . . but there seems to be kind of a remnant, a rag-tag group of people, who find their power in the transcendent, very personal God. . . . I don’t think they’re ever fooled for very long into thinking that the power is theirs. That’s not what protesting means, although it’s often misinterpreted that way—that people are seen as being self-righteous and know-it-alls. I think a true witness of protest says that we’re powerless, basically, but that we have found the source of power in a God who loves and gives and is a God of justice and mercy. We’ve seen it work at Wurtsmith, where my deepest experience of the Spirit [was] at that Easter morning liturgy. We stood literally in the shadows of the bombers and it was clear where the power was, in the simple elements that this motley group of people stood around. It wasn’t in those arms at all. When you make your—your little prayer, in the face of the symbols of war, it’s a transcendent experience. You’re frightened and cold, and tired, and yet there’s a sense of the ultimate power of the Resurrection.

Wylie-Kellerman tells us that for Father Berrigan, “resurrection and discipleship were synonyms.” Both Berrigan and Wylie-Kellerman treat the Gospel of Jesus as a matter of life and death. At the end of this walk down memory lane, replete with detours, Wylie-Kellerman ruefully admits that he is now an elder. I am, as well, and although not as wise as Pastor Wylie-Kellerman and Father Dan Berrigan, S.J., are, I offer you this book. Read it, savor it, and as good food does, let it change your life.

On Learning to Pray, and Reflecting on Prayer, with Father James Martin by Joe...

Time for Your City Council to Urge Our Government to Ban the Bomb by Patrick...
Scroll to top