Two years ago, for Herman Melville’s bicentennial, I wrote a three-part reflection on the spiritual, metaphysical, and moral questions in Moby Dick entitled “The Gospels of His Time.” The main idea was centered on Melville’s notion that although he wrote the gospels of his time, nobody listened, and he, knowing that, claimed he would end up “in the gutter.” Fortunately, that did not happen, but it was not far from the truth.

Much has changed since then. Many have listened, and a lot has been written about Melville and his Whale (as the first British publication was titled in October 1851), especially in our country since the beginning of his revival in the 1920s. Biographies, books of criticism, chapters in books, articles, and assorted personal pieces; theatrical performances, operas, and films of his works; books that have tried to imitate his fiction in various ways—all of these have become a cottage industry all over the world for publishing houses, journals, magazines, theaters, film studios, and even the naming of ships.

I would like to linger on a recent novel by the Australian writer Charlotte McConaghy entitled Migrations (2020), which, on a literal level, appears quite different from Moby Dick. In Melville’s novel, Ahab is committed to killing the white whale; Franny Stone, the main character of Migrations, is committed to saving our most vulnerable, and endangered, creatures. On a deeper level, McConaghy probes questions and explores themes that concerned Melville: what has happened to our country’s original ideals and promises (as stated in the Declaration of Independence and elsewhere), and where are we now?

By 1851, as Melville was furiously working on his novel, the country was committed to Manifest Destiny, engineering the industrial revolution, exterminating Native Americans or forcibly removing them from their homeland, and expanding slavery. These prized “land values” of the 1840s and ’50s, Melville writes in the first paragraph of Moby Dick, lead Ishmael to pause involuntarily “before coffin warehouses,” bring him up to “the rear of every funeral” he meets, and require him to have “a strong moral principle” that will prevent him from “deliberately stepping into the street, and methodically knocking people’s hats off.” This is the moment, he declares, when “I account it high time to get to sea as soon as I can.” A sea voyage is his “substitute for pistol and ball”: “Cato throws himself upon his sword; I quietly take to the ship.” However, in boarding the Pequod, captained by Ahab, Ishmael will be forced to confront issues he has never dreamed of.

In Migrations, McConaghy enlarges the field of inquiry by attacking the results of our polluting, killing, and destroying—that is, the worldwide problem of climate change and our reluctance to take it seriously. Humanity’s hubris in dealing with issues in ecology and environmental degradation is at the forefront of her story, which is set in the not-too-distant future.

Like Moby Dick, Migrations begins as an adventurous sea tale portraying odd characters in various stages of physical (and metaphysical) quest. The narrative soon explodes with an originality all its own, issuing a deeply grounded philosophical commentary on (or rather an indictment of) human behavior. We have polluted our natural resources, killed our animals, and, in some cases, caused the extinction of species: climate change has reached the point where it is dramatically, and negatively, effecting all phases of human and animal life. These are themes for a novel for our time: a passionate reflection on ecological disruption, but also a compassionate rendering of believable characters with human flaws and virtues that we can readily identify with.

In Pope Francis’s encyclical on ecology, Laudato Si’, he writes about the reality of climate change as “a result of human activity” (§23). We are called to reduce carbon dioxide emissions and try to slow the planet’s warming, which will have drastic environmental, social, economic, and political effects, particularly on the poor. In Migrations, McConaghy targets these issues as they affect the poor and those on the fringes of society, but also, and perhaps as importantly, on the devastating effect they have on animals that have already died or are in the final struggle of life.

When Migrations appeared in 2020, one reviewer at the New York Times quipped that it should have been titled Call Me Franny, imitating Melville’s “Call me Ishmael” at the beginning of Moby Dick. However, there is more than a clever joke in this suggestion, for although Franny Stone does have obsessions, they are wildly different from those of Ishmael, the crew members, and, most importantly, of Ahab, who wants not only to kill the white whale, but to do so in epic grandeur. Having Franny’s name in the title would also undermine McConaghy’s main theme: that we all have a migration story, and that we are all connected, human and animal. 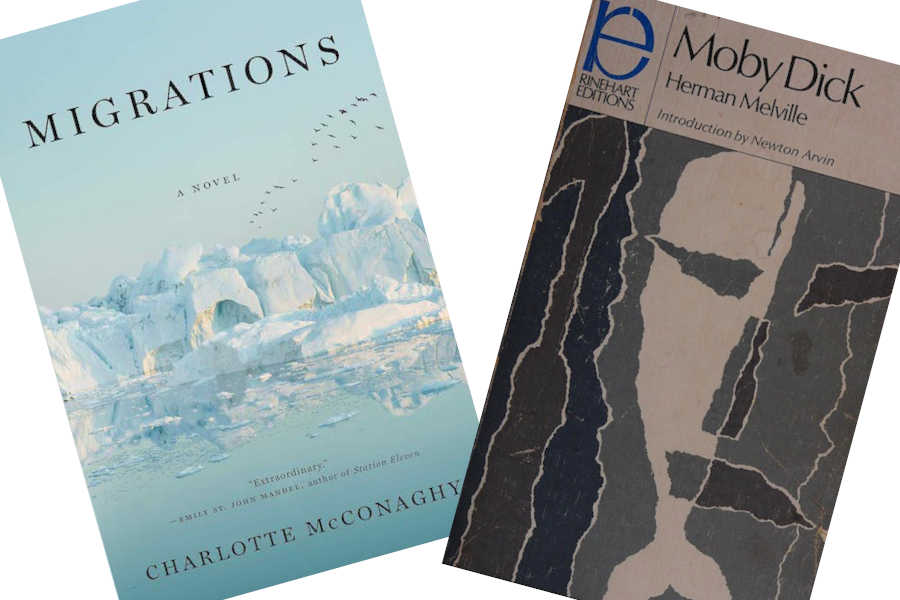 On a literal level, Migrations concerns the journey of the Arctic terns from the Arctic to Antarctica and back again in one year, the longest migration of any creature on earth. Franny’s mission is to track the birds on what she and her husband, Niall, a professor and climate scientist, think might be their last journey. Other levels of migration are also evident: Franny’s personal journey from her home in Ireland to Australia when she was young, then a later move back to Ireland, and finally her trip to Greenland to persuade a fishing captain, Ennis Malone, to allow her to accompany him and his crew of the Saghani in a voyage to catch herring. She claims that if they follow the terns she has tagged as they fly south to Antarctica, the birds will lead them to a big catch of herring.

Captain Malone also has a quest: he is searching for the “Golden Catch,” a haul of herring that will provide him with enough money to fight for custody of his children. Both he and the crew are skeptical of Franny’s plan. She, however, is very persuasive, and a series of events makes it possible for the Saghani to follow the terns on their journey south.

While Malone and each of the crew members have backstories, Franny’s is the most compelling—and outrageous. McConaghy dramatizes it, in bits and pieces, through a series of flashbacks: 21 in all, with one “flash forward” at the very end. Some are short, just a page or even a paragraph; others are longer and could be separate chapters. Taken together, they reveal Franny’s checkered past. Each flashback is designated by a time period: “Twelve years ago,” “Two years ago,” “Six months ago,” and so forth. Although this is an arresting way of showing Franny’s development, it can be confusing at times. Some of the characters’ names run together, and unless you have a photographic memory, you might, as I did, have to flip back and forth to keep characters, events, and timelines straight.

There is also the problem of plausibility. Some of the events, especially toward the end, are clearly “over the top”—until one considers for a moment the events in some of the classics of our literary canon. Might they require, as Coleridge once remarked, “a suspension of disbelief” on our part? (Think, for example, of Ahab’s defying his very likely electrocution in the “Candles” chapter of Moby Dick.)

These, I would argue, are minor quibbles with a story featuring characters and events that leap off the page and become fixtures in our minds and hearts, especially as we confront our present climate crisis. Still, a thoughtful reader might ask, doesn’t the Saghani’s voyage to catch herring contradict McConaghy’s theme of ecological salvation by becoming another example of humans killing creatures for their own gain? Franny does have moments of regret when she considers this, but her feelings of guilt and grief are ultimately displaced by her obsession to follow the terns—a sublime mission which in her mind becomes a kind of quest for the Holy Grail. It even overshadows Malone’s quest for the “Golden Catch,” as he realizes (and the reader along with him) that his dream will not be achieved. It is fascinating to watch how his obsession gradually attaches itself to Franny’s, becoming all-consuming for both of them by the end.

The epic finale, which includes a frightening underwater rescue and redemption (a symbolic underworld experience), is not, in scope, unlike that in Moby Dick. Recall how the white whale, swimming in a wide vortex, creates a gigantic whirlpool that drags the ship and mates down. Ishmael, on the fringe of the swirling vortex, is saved in the nick of time, just as the whirlpool slowly loses its power when he reaches its center. Instead of being drawn down into the depths, he revolves towards a “button-like black bubble at the axis of that slowly wheeling circle . . . Till, gaining that vital centre, the black bubble upward burst; and . . . owing to its great buoyancy, rising with great force, [Queequeg’s] coffin life-buoy shot lengthwise from the sea, fell over, and floated” by his side. He is then “buoyed up by that coffin, for almost one whole day and night” before being picked up “by the devious-cruising Rachel, that in her retracing search after her missing children, only found another orphan.” We cannot but be awed, if not overwhelmed, by Melville’s quote from Job at the beginning of this section, the novel’s epilogue: “And I only am escaped alone to tell thee.” Although Ishmael’s life has been saved, his dire concluding words ring out loudly in our imagination as he floats on that coffin “on a soft and dirge-like main” before being rescued.

In stark contrast, McConaghy’s apocalyptic ending is much more positive, even joyful. She has written a powerful story that twists and turns with sudden, unexpected events and indelible characters. She dramatically delineates a very serious current issue and centers it on the driven, lovable, heartbreaking Franny Stone, whom we will not easily forget. I don’t think Melville would either, nor would he object to her utilizing some of the motifs of his novel. He might even be impressed with how she does it. ♦

Leonard Engel, Professor Emeritus of English at Quinnipiac University, lives in Hamden, Connecticut, with his wife Moira McCloskey. He can be reached at Len.Engel@quinnipiac.edu.

Visions of Daniel by James Magner
Scroll to top