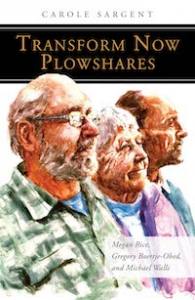 And they shall beat their swords into plowshares, and their spears into pruning hooks: nation shall not lift up sword against nation, neither shall they learn war any more.
– Isaiah 2:4

Today our planet is in greater danger than ever. Russia has put its nuclear arsenal on high alert as part of its invasion of the Ukraine, an invasion some blame on an ever-expanding NATO. There are more than 13,000 nuclear weapons in the world, with Russia and the US each holding many more than enough to destroy the planet forever. Thousands of wailing words about this danger are overwhelming the media, but few of us are doing anything but praying for peace.

Enter Carole Sargent’s exciting and enlightening book on Catholics and other pacifists who pray with their bodies as well as their hearts, who have moved from being protesters who raise their voices to nonviolent resisters who risk their lives.

In 2012, Megan Rice, a sister of the Society of the Holy Child Jesus, and Catholic Workers Michael Walli and Greg Boertje-Obed took part in the Transform Now Plowshares action at Oak Ridge, Tennessee. This action was part of the Plowshares Movement, a nonviolent endeavor birthed by the late Phil Berrigan and Jonah House in 1980 when the first group entered a General Electric missile plant in Pennsylvania, hammered on re-entry vehicle cones for nuclear warheads, poured their blood on project blueprints, and waited to be arrested, thus setting both the tone and symbolism for the more than 100 Plowshares and similar actions that have since occurred.

Sargent’s book has given us an amply documented history of perhaps the most famous Plowshares action of this century, one directed specifically at the “mother factory” of every nuclear weapon made in the US: the Y-12 Uranium Enrichment Facility at Oak Ridge. It manufactures the depleted uranium which is a necessary and insanely dangerous component of every nuclear weapon. The three resisters targeted this plant to highlight the fact that it was building a new uranium processing facility to the tune of $7.5 million shamefully spent dollars. As they said in an article in The Nuclear Resister, “The United States spends more on nuclear weapons than on education, health, transportation, and disaster relief combined.” I don’t have the space to recount their harrowing and hazardous entry to the very heart of the complex on July 28, 2012, a “shoot to kill” zone that was supposedly protected by a security organization that was paid $150 million a year to do so. It wasn’t.

It was this egregious breach of security that gave the Transform Now Plowshares so much publicity; although, to her credit, Sargent concentrates on people, not administrative memos.  Congressional hearings and other investigations revealed that sentry cameras weren’t working, electric fences were inoperable, and the alarms that were received were ignored as “animal intrusions.” These failures enabled the pacifists to reach their target but highlighted the huge safety problems of the complex. Finally, a lone sentry arrested the resisters after they had hung banners, spilled blood on walls, and spray painted “Disarm Now!” and other slogans. The original security guard knew they were unarmed, even though his backup treated them as if they were, forcing them to lie handcuffed and supine for several hours.

To my mind, they were armed, armed with their long commitment to nonviolence, and with bibles, banners, candles, a loaf of bread, statements of nuclear sin that would be introduced at their trial, but most of all by the grace of God. Sargent portrays their prayerful protest powerfully and completely. She also ties it to the movement’s history and makes a beautiful connection between Sr. Megan Rice and Sr. Anne Montgomery, veteran of the first Plowshares action and six others.

Plowshares actions have four components, all engagingly described in the book: One, discernment and planning, which often takes a year and tests the participants’ commitment to the action and the trial and jail time that often follows. Two, the action itself, always completely nonviolent, where the peace resisters secretly trespass into a nuclear facility and symbolically “beat swords into plowshares” by hammering with tiny hammers on missile silo covers or buildings, spilling baby bottles of blood on walls and signs, hanging banners, and leaving statements of their intent to disarm. Then Plowshares resisters wait, sometimes hours, to be apprehended and charged. Three is the trial itself, which can be long and dramatic and in Sargent’s book is recounted with telling detail. Four is the prison time, which can range from “time served” while awaiting trial to years and years. For all three of the Transform Now Plowshares, their prison time was used to connect with and serve the incarcerated, truly the poorest of the poor.

Sargent has used portions of my oral histories of nonviolent resisters who have been jailed or imprisoned. See my Doing Time for Peace: Resistance, Family, and Community, which shows, as Sargent’s book does, that the success of any resistance action is tied to its external supporters, and Crossing the Line: Nonviolent Resisters Speak Out for Peace, which also details international antiwar resisters, who are often found not guilty, unlike the Transform Now Plowshares who were sentenced on two charges: depredation of property and sabotage. The Sixth District Court of Appeals soon overturned the sabotage conviction, setting good precedent for subsequent Plowshares Actions, such as the Kings Bay Plowshares Seven in 2018. Because the three resisters had already served sentences exceeding the depredation charge, they were swiftly and awkwardly released to a strict probation. Sr. Megan died just as the book was going to press, but Sargent wisely decided not to change the tenses as their actions and statements remain excruciatingly relevant.

Their stories and those of their supporters and predecessors should call us all to action. The time is now! We simply must stop the threat of nuclear war by convincing our government to join with Pope Francis and others in the world to outlaw and eliminate nuclear weapons. Read Carole Sargent’s book and then stop wailing and start acting!

A Modern-Day “Moby Dick” by Leonard Engel
Scroll to top