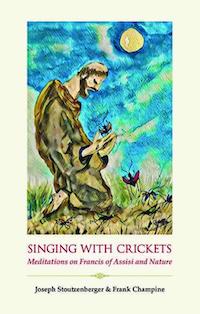 Singing with Crickets:
Meditations on Francis of Assisi and Nature
By Joseph Stoutzenberger and Frank Champine
Tau Publishing, 2022
$17.95   98 pp.

It is rather interesting that the longest chapter in this slender volume is the introduction, where the author outlines his premise that Saint Francis of Assisi remains an example to the global community in the 21st century, especially when it comes to the Catholic Church’s very recent shift toward care for creation.

Author Joseph Stoutzenberger cites the ways that recent popes have connected environmental concerns not just with the gospels, but with the “seamless garment” of life. “Ecology, for whom Francis serves as a worthy patron saint, means ‘the study of our home,’” he writes. “We have no other place to live than the lovely and intricately designed earth that is our home.”

More than just a “scientific dilemma calling for scientific solutions,” the author points out that caring for our common home is a mandate hearkening back to Jesus himself, mirrored to perfection by Saint Francis.

Three sections follow the introduction: “The Words of Francis,” “Tales of Francis and His Friends,” and “The Canticle of the Creatures.” These short reflections—or “meditations,” as Stoutzenberger terms them—are not meant to be devoured but read prayerfully one at a time and contemplated quietly. Each includes a narrative, a prayer with scriptural quote, and a poem and visual rendering by artist Frank Champine on themes such as “The Universe Groaning,” “Gentle as a Lamb,” and even “Sister Death.”

In addition to authoring two other Francis-inspired books, Stoutzenberger is a professor emeritus of religious studies at Holy Family University in Philadelphia, Pennsylvania. He is also described as a former social worker, high school religion teacher, and college campus minister.

Though clearly an academic who has studied the writings of and about Saint Francis extensively, Stoutzenberger takes the example of the saint and keeps his phrasing simple and to the point. He doesn’t embellish the stories of Francis, instead creating insightful scenarios with which readers can identify and consider in the face of current ecological crises.

Champine is retired, with experience as an educational consultant, college instructor, and social studies teacher. His artwork has appeared in other books, as well as his own published work of poetry and paintings. The image of Saint Francis on the cover and another at the end of the introduction fall in a modern vein, while others range from more traditional in style—a stalk of bamboo, for instance, a group of flowers, a sunset—to the rather abstract.

The final section of the book contains a brief list of organizations focused on various aspects of the environment. Notably absent, especially since this book is recently published, is the Laudato Si’ Movement, which is at the forefront of implementing Pope Francis’s climate concerns as outlined in his encyclical of the same name.

There is one odd feature in the printing of this book: while the preliminary pages in most volumes use roman numerals to differentiate that section from the main body of the text, the first 10 pages here have periodic numbering, which then starts over with the introduction on page 1.

Given the number of pages, the book’s price may seem rather high, but for those seeking to deepen their understanding of Saint Francis and the ongoing need to work for climate justice, it will be a good investment. ♦

“Cords of Human Kindness”: An Introduction to Small Christian C...
Scroll to top