Last month we had the opportunity to speak with Dr. Roger B. Alfani, Core Fellow in the University Core at Seton Hall University, about his book Religious Peacebuilding in the Democratic Republic of the Congo (Peter Lang, 2019). Religious Peacebuilding analyzes the contributions of three churches at both the leadership and the grassroots levels to conflict transformation in the Congolese city of Goma.

Dr. Alfani was born in Kasongo in the Maniema Province of the eastern Democratic Republic of the Congo (DRC) and attended Catholic schools administered by the Marist Brothers. He received his MA and Ph.D. from the University of Montreal. His current research examines the intersection of religion and foreign policy, and the relationships between religion, resilience, and refugees.

Our conversation touched on the concept of religious peacebuilding and the differences between “conflict resolution” and “conflict transformation,” the current situation in the DRC and surrounding region, and the role of religion in peacebuilding efforts in the DRC and around the world. Dr. Alfani also addressed the many contributions of Small Christian Communities to the process of peacebuilding, a subject highlighted in the excerpt from his book reprinted below.

Our special thanks to Dr. Alfani for sharing his practical and prayerful insights into peacebuilding with us, and to Dr. Nancy Enright of Seton Hall University for facilitating our connection. Dr. Alfani’s faculty page at Seton Hall is available here, and the publisher page for Religious Peacebuilding in the Democratic Republic of the Congo is available here. We hope the recording inspires prayer and action, as Dr. Alfani states, “so that peace can be lived from a positive perspective.” ♦

(Excerpted from Religious Peacebuilding in the Democratic Republic of the Congo)

Many African countries were embroiled in sociopolitical turmoil in the early 1960s. While many of them obtained their independence, it was accompanied with a series of conflicts like protests and rebellions. Administrative roles (clerical and civic) once played by colonists in both Catholic and Protestant churches had to be handed over to local leaders (autochthonous). 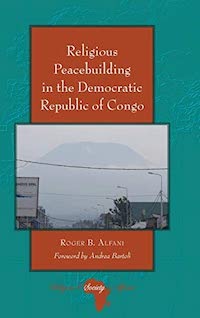 During these socio-political challenges, the Congolese Catholic episcopate readjusted both its ecclesiastic approach and its investments, which were already being squandered. In addition, the Congolese Roman Catholic Church was one of the largest religions in the country, followed by Protestant churches, who had a reduced number of ordained priests. As a result of pre- and post-independence violence and instability, suspicions between the Congolese state and the churches, and the imbalanced number of Catholic and “autochthones/indigenous clergies, it was extremely difficult to respond to their followers’ needs and those of the Congolese population in general. Thus, the leaders of the Congolese Roman Catholic Church advocated for a new pastoral approach to be adapted and contextualized to the Congolese reality—a sort of inculturation that fostered human advancement, authentic development and, ultimately, peace in all its dimensions. I will devote upcoming sections to this new pastoral approach, namely Small Living Christian Communities (Communautés Ecclésiales Vivante de Base, [CEVBs]).

Authors like [Vianney Jean-Marie] Kitumaini and [René] Coste argue that a pastoral approach which fosters peace is likely to be successful when implemented in CEVBs. For Kitumaini, CEVBs reach where parishes and dioceses cannot. Since this new pastoral approach enables laymen to undertake certain responsibilities of priests, as a result, they are discharged from other assignments and laymen feel more involved in their communities where the rule of law is relatively non-existent. Kitumaini illustrates the work undertaken by one Congolese Catholic bishop, Alois Mulindwa, who made the development of CEVBs his pastoral priority during his episcopacy:

In the field of justice and peace, the [Catholic] Church of Bukavu, through the initiative of the diocesan Commission of Justice and Peace, has begun to train paralegals at the parish and CEV levels in order to make the population’s rights and duties known and hence provide a basic socio-legal education able to incorporate all mechanisms of taking responsibility over situations of mistakes, of negligence or delays in applying the law. Through this diocesan commission, the Archdiocese of Bukavu challenged the corruption within the state’s legal apparatus, because Christians have learned to rely on the Church for conflict resolution.

The urgent need for a new pastoral approach stressed by the Congolese priest Kitumaini echoes that of the American bishops in their pastoral letter, which Coste calls a “social pastoral letter.” The two authors converge on certain aspects of the application of this pastoral letter: (1) prayer for peace and sacramental liturgy; (2) education and training of consciences (preaching, homily and catechism of peace); and (3) deaconry of peace. These three applications will deepen the Gospel of Christ (peace) at the local level and mature believers’ knowledge of their rights and responsibilities as various training sessions are carried out. Thus, a community of conscience is certain to emerge. ♦

What Has Chess to Do with the Spiritual Journey? by O’Neill D’Cruz

Christmas Joy Brightly Lights the Shadow of the Cross by Fran Salone-Pellet...
Scroll to top